Past and current students are coming to the defense of Marston Riley who was arrested after being caught on video punching a student who repeatedly hurled racist slurs at him. 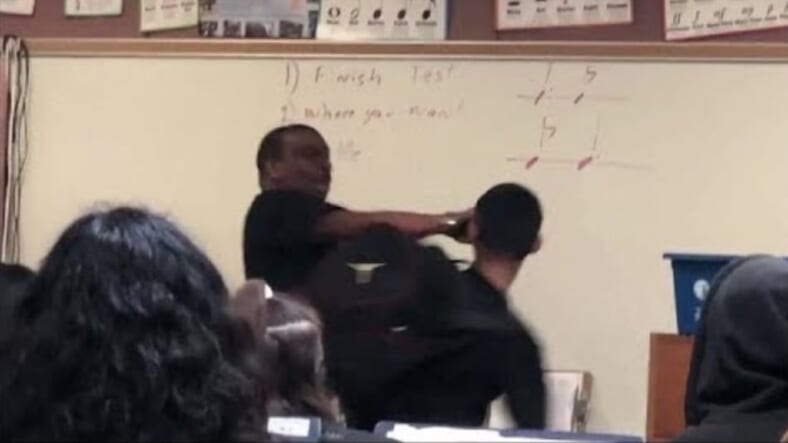 Students are coming to the defense of their fists-swinging music teacher who was arrested after being caught on video beating up a student who hurled racist slurs at him, Buzzfeed News reports.

The Southern California teacher, Marston Riley, 64, was a teacher at Maywood Academy High School in Los Angeles he is under fire after coming to blows with a belligerent 14-year-old student he asked to leave class because he was not wearing a band uniform.

The boy refused to leave the classroom and reportedly threw a basketball at Riley before the fight ensued.

The two exchanged punches for a bit before students and a resource officer pulled them apart. The boy ended up on the ground with Riley continuing to throw punches at him. The student was reportedly taken to a local hospital and treated for moderate injuries.

In a statement to BuzzFeed News Sunday night, the Los Angeles Unified School District said it is “extremely disturbed by the reports of the events that occurred.”

“We take this matter very seriously and do not condone violence or intolerance of any kind. Los Angeles Unified is cooperating with law enforcement in investigating this incident,” the district said.

Students are siding with Riley and say that he was defending himself.

Hailey Martinez, who was in the room explains that the student cursed at Riley after he asked him to “put on your uniform shirt,” she said.

“And he said ‘nah wtf’ and Mr. Riley told him to either get out or get a uniform shirt and the student started getting rowdy with him and he kept telling him you know like ‘wtf you gonna do about it n****’ ‘you gonna do shit’ and threw him the basketball and Riley kept ignoring him and told him to leave twice and the kid didn’t listen and continue to talk s**t to Riley and that’s when the fight happened,” Martinez said.

Nathalie Londono, a graduate who took Riley’s class last year described him as “really attentive, down to earth, and caring about his students.”

“They were caught ditching class and Mr.Riley just wanted to make things right and just send them back where they were supposed to be,” she said.