After Hurricane Michael, voting still taxing, but not impossible, for some Florida residents

Natasha Alford
“Mayor Andrew Gillam is going to be the next governor of Florida,” said Judy Mount.

The line around the polling place in Marianna, Florida, goes all the way back to the parking lot, even in pouring rain.

While some people will have no problem getting to the polls today, voters in Jackson County are still reeling from the devastating effects of Hurricane Michael. As a result, their polling places have been centralized to only three locations.

Traveling into Marianna to investigate what struggles people have had to face getting to these three locations, I saw trees still down and buildings that remain without roofs. Despite the obstacles, the parking lot remained full with people driving back multiple times in hopes of finding an open spot.

We not used to being misplaced or having to vote in another location, said Judy Mount, the chair of Jackson County Democratic Party as she stumped outside in the rain for Mayor Andrew Gillum.

“So, we had to get around and make phone calls and post on Facebook; do the Block churches.”

Mount says a culture of early voting in this community, helped get things started today and alleviated some of the logistical issues. And, it will also likely help her candidate win.

“Mayor Andrew Gillam is going to be the next governor of Florida,” Mount told theGrio.

“We will make history tonight and we are thrilled about it. He is bringing excitement that’s never been seen before here and even the polls in Broward and Miami Dade County. Three times as many people have voted in the election then in the last midterm election. You’ve got people who are just coming out on top of each other,” said Mount. 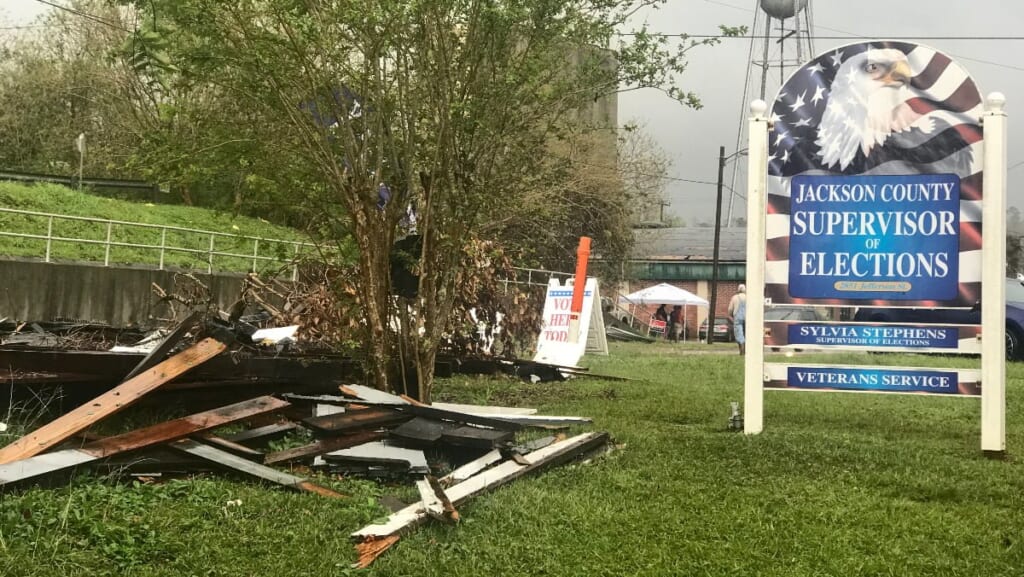 Voters in Jackson County are still reeling from the devastating effects of Hurricane Michael and have had to change their polling places as a result. (Photo courtesy of N. Alford)

When polling closes in less that five hours, Mount will get to see if her work has paid off.

“When I drove by and I saw that the line at that particular time was all the way around the building, I’ve never seen that happen ever before. So, I’m just so anxious for 7:01pm to get here.”