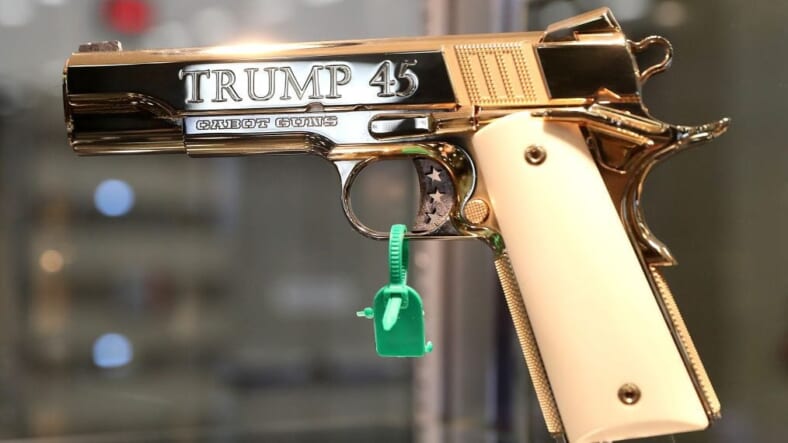 DALLAS, TX – MAY 05: A custom “Trump 45” handgun is displayed during the NRA Annual Meeting & Exhibits at the Kay Bailey Hutchison Convention Center on May 5, 2018 in Dallas, Texas. The National Rifle Association’s annual meeting and exhibit runs through Sunday. (Photo by Justin Sullivan/Getty Images)

Do you hear that?

That’s the deafening silence of the National Rifle Association in the wake of the shooting death of Jemel Roberson, a security officer who was killed by the police while doing his damn job at a suburban Chicago nightclub.

Roberson, who was in possession of a legally registered gun, allegedly attempted to subdue an armed club patron who was involved in a skirmish. Roberson was wearing a coat with big-ass letters reading “SECURITY.”  Reportedly, when police officers arrived on the scene,  several people yelled at the cops that Roberson was a security guard and was not the assailant.

All the cops saw was a n—a with a gun. They shot first and parsed out the details later. Every Black person reading about this incident knows that Roberson would likely still be alive if he had on that same SECURITY jacket, but resembled Chris Evans instead. Above everything else, they’re scared of us.

Roberson’s death comes in the wake of President Iceland Bambaataa (Trump) responding to the Oct. 27 Pittsburgh synagogue massacre by suggesting that gun laws had nothing to do with anything and that the shooting could’ve been avoided if a good dude with a gun was there to stop them. Because, y’know, armed gunmen should be at the main entrance of every place of religious worship.

But we know the president isn’t talking about folks like Roberson, and the NRA has made it crystalline that they have no love or kind words for Black people who are murdered while exercising their second amendment right to bear arms. Hell, it hasn’t been that long since the NRA put their own racist bona fides on full blast.

In fact, the NRA tends to victim blame Black folks who die. As Adam Serwer writes in his The Atlantic piece, “The NRA’s Catch-22 for Black Men Shot by Police:” “When armed black men are shot by the police, the NRA says nothing about the rights of gun owners; when unarmed black men are shot, its spokesperson says they should have been armed.”

The NRA displayed the same deafening silence they have for Roberson for Philando Castile, who was murdered in his own car in 2016 by a police officer after Castile put his hands up and told the officer he had a legal gun that wasn’t even brandished. NRA spokeswoman Dana Loesch – aka brunette Kellyanne Conway – blamed Castile for his own death while suggesting that Botham Jean, the Black man murdered by a white intruder in his own apartment in September, should’ve had a gun to defend himself because duh.

The NRA ostensibly defends the second amendment in part as a means to prevent a governmental uprising against its citizens – the primary reason it was written hundreds of years ago when folks were defending themselves with muskets. But let Alton Sterling have drawn his gun on the police officers who would go on to kill him. His death might have been inevitable since he likely would’ve been shot to death anyway by the cops in that situation. But had his gun led to his survival, Sterling would’ve likely been thrown underneath the prison and Loesch would’ve kept her Botoxed mouth closed.

There’s more proof than can fit in this space that members of Congress (ahem, Republican members) are in the pocket of the NRA, which is why the gun control laws everyone crows about changing after every mass shooting on American soil remain untouched by politicians who have the power to actually affect some damn change.

Roberson’s mother, Beatrice Roberson, filed a federal lawsuit that won’t bring her son back, but I certainly hope she gets all the coins to help at least slightly mitigate this sad, horrible situation. I also hope that his death moves the needle for more non-Blacks to understand that how we’re perceived leads to our bodies being put in danger every day by the same people meant to protect us.

I wish I were more optimistic about that.