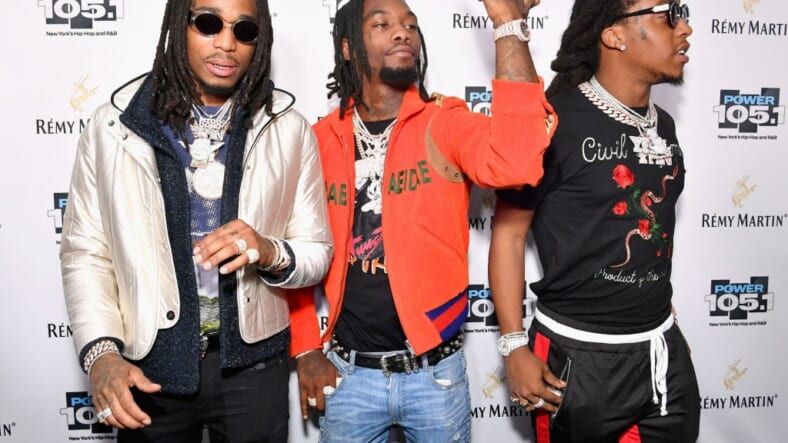 James Corden got a lesson in coolness and how to stunt on your haters by showing wads of cash, during an episode of Carpool Karaoke on the Late Late Show featuring The Migos.

Migos members Offset, Takeoff and Quavo made a few more fans for sure as they rapped their classic hits like “Bad and Boujee” while counting stacks of cash with Corden to the tune of $170,000.

And if that wasn’t enough to make you smile or long to catch a ride with that crew, the Migos let us know that they’ve got love for Whitney Houston and sang along and dabbed to “I Wanna Dance with Somebody (Who Loves Me)”.

Corden is so crazy and joined the rap trio for a shopping spree too, making it known “We’ll be paying cash!”

The full video aired on the Late Late Show.

While Cardi B’s boo Offset is having fun on-set with James Corden for Carpool Karaoke, she’s planning to take part in a new talent show.

Chance the Rapper, T.I., and Cardi B have signed on to be the main judges for the upcoming series, Rhythm + Flow that is set to debut in 2019.

The show will attempt to unveil new talents from the hip hop world with contenders vying for a shot at super stardom. Netflix has ordered 10, hour-long episodes and has it slated to premiere next Fall.

We can’t wait to see what kind of advice Cardi B has for the contestants who aren’t too far from where she was a few years back when Love & Hip Hop NY made her a household name and helped launch her incredible music career.