Stacey Abrams ‘planning to get back into the ring’

“I’m going to spend the next year as a private citizen, but I do indeed intend to run for office again,” Abrams told CNN's Jake Tapper. 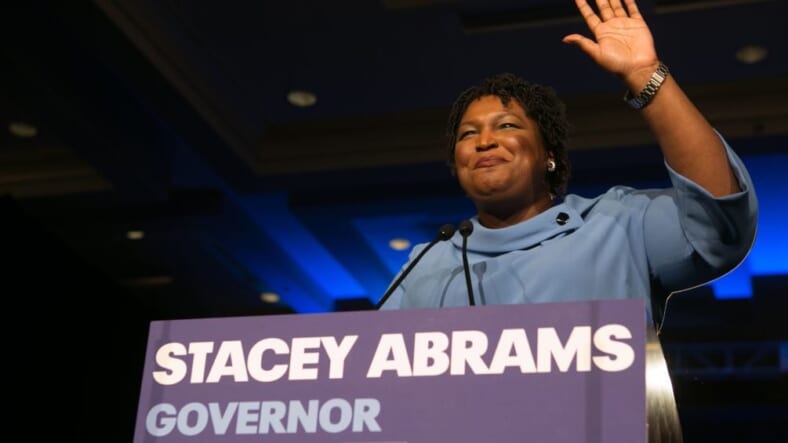 Democratic Gubernatorial candidate Stacey Abrams addresses supporters at an election watch party on November 6, 2018 in Atlanta, Georgia. Abrams and her opponent, Republican Brian Kemp, are in a tight race that is too close to call. A runoff for Georgia’s governor is likely. (Photo by Jessica McGowan/Getty Images)

Just to be clear: Stacey Abrams may have narrowly lost Georgia’s governor’s race to Republican Brian Kemp, but she is not done with politics, according to the Huffington Post. Not by a long shot.

On Sunday, just two days after Abrams conceded to Kemp, she vowed to run for office again. The Democrat and former minority leader of Georgia’s House of Representatives, told CNN’s Jake Tapper on State of the Union that she intends to take a long break to regroup but will most certainly come back fighting.

“I’m going to spend the next year as a private citizen, but I do indeed intend to run for office again,” Abrams told CNN. “I’m not sure for what and I am not exactly certain when. I need to take a nap, but once I do, I’m planning to get back into the ring.”

Abrams let it be known that there is too much at stake to sit idly by on the sidelines. In a fiery speech on Friday, Abrams announced she was ending her bid for Georgia governor.

“I will not concede, because the erosion of our democracy is not right,” Abrams said on Friday. “More than a million citizens found their names stripped from the rolls by the secretary of state, including a 92-year-old civil rights activist,” she said, adding that “democracy failed Georgia.”

In the CNN interview on Sunday, Abrams attacked Kemp as a “horrible actor who benefited from his perfidy” during the gubernatorial race, which was the closet in more than 60 years.

“There was a deliberate and intentional disinvestment and I think destruction of the administration of elections in the state of Georgia,” Abrams said, according to the Huffington Post.

In a report last month, Kemp was accused of suppressing minority voters, including roughly 53,000 voter registration applications which were on hold with just weeks to go before the election. The majority of those applications were for African-American and female voters under the state’s exact match law, which requires information on voter applications to exactly match that held by the government.

There were also other allegations of voter suppression and conflict of interest. Before resigning his post on Nov. 8th, when he declared himself the winner, Kemp oversaw the election process as Georgia’s secretary of state.