The Cleveland Browns are said to be interested in the former Bush advisor as its next head coach. 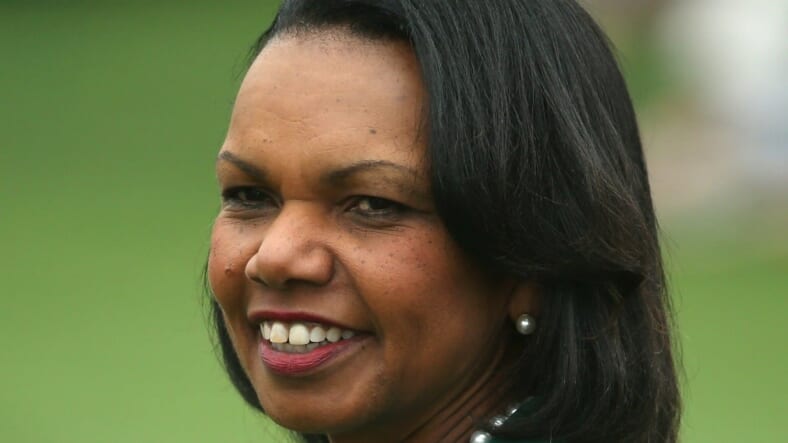 Could Condoleezza Rice be the next head coach of the Cleveland Browns?

According to ESPN, Rice is on the “wish list” of candidates to interview. If Browns general manager John Dorsey does in fact interview the former secretary of state under George W. Bush, it would mark the first time a woman has ever been interviewed for a head NFL coaching job, although there are three female assistant coaches in the league.

The ESPN report says the Browns are interested in her ideas and input. But she released a statement Sunday, downplaying the prospect.

“I love my Browns — and I know they will hire an experienced coach to take us to the next level,” she wrote in a Facebook statement.

I love my Browns — and I know they will hire an experienced coach to take us to the next level.On a more serious…

Dorsey described Rice as “a great leader [who] possesses the highest possible character and also happens to be a Browns fan,” the New York Post reported. “Our coaching search will be thorough and deliberate, but we are still in the process of composing the list of candidates and Secretary Rice has not been discussed.”

Rice, a huge football fans, has been floated as a candidate for NFL commissioner. The latest rumblings about the Browns come at a time when women are landing more prominent roles in professional sports. For example, the San Antonio Spurs hired Becky Hammon as an assistant coach, the Buffalo Bills hired Kathryn Smith as a quality control assistant, the Oakland Raiders hired Kelsey Martinez to its strength staff, and the San Francisco 49ers hired Katie Sowers as an offensive assistant, according to ESPN.

Dorsey said last week he was open to hiring a woman for the position vacated by Hue Jackson, who was fired by the organization, joining the fate of quite a few former coaches in Cleveland over the past several decades.

In a statement reported by ESPN, Dorsey said, “Our coaching search will be thorough and deliberate, but we are still in the process of composing the list of candidates and Secretary Rice has not been discussed.”

Rice, 64, has always been a fan of the Browns, a love that was nourished as a child when she would watch Cleveland games with her father in Birmingham, Ala. Rice has even sported the team’s jersey in NFL ads.

Over the years, Rice has increasingly become involved in sports. She was one of the inaugural members of the College Football Playoff selection committee, where she worked from 2013 to 2016, and she also chaired the Commission on College Basketball.