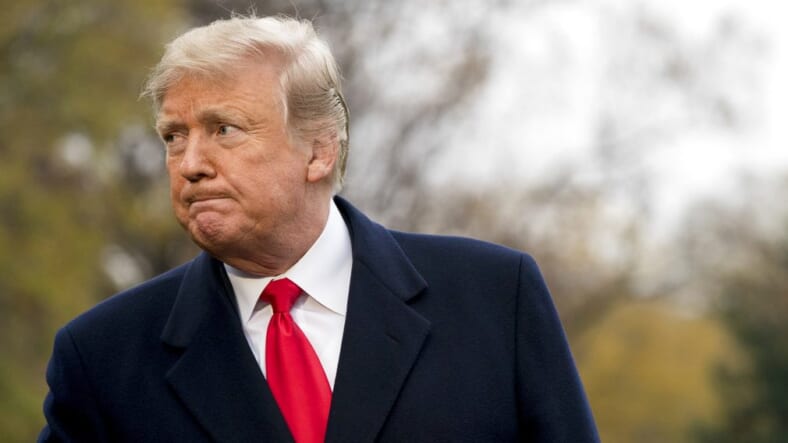 President Donald Trump listens to a questions as he speaks to members of the media before boarding Marine One on the South Lawn of the White House in Washington, Monday, Nov. 26, 2018, for a short trip to Andrews Air Force Base, Md., and then on to Mississippi for rallies. (AP Photo/Andrew Harnik)

By CALVIN WOODWARD, Associated Press
WASHINGTON (AP) — President Donald Trump is falsely asserting that the federal policy that split migrant families at the border was practiced by his predecessor, Barack Obama, as well.

The Obama and Trump administrations operated under the same immigration laws but the “zero tolerance” policy that drove children from their parents was Trump’s.

TRUMP: “@60Minutes did a phony story about child separation when they know we had the exact same policy as the Obama Administration. In fact a picture of children in jails was used by other Fake Media to show how bad (cruel) we are, but it was in 2014 during O years. Obama separated … children from parents, as did Bush etc., because that is the policy and law. I tried to keep them together but the problem is, when you do that, vast numbers of additional people storm the Border. So with Obama seperation is fine, but with Trump it’s not. Fake 60 Minutes!” — tweets Sunday.

THE FACTS: Obama did not have a separation policy. The Trump administration didn’t, explicitly, either, but that was the effect of zero tolerance, which meant that anyone caught crossing the border illegally was to be criminally prosecuted, even if they had few or no previous offences.

The policy meant adults were taken to court for criminal proceedings and their children were separated. In most cases, if the charge took longer than 72 hours to process, which is the longest time that children can be held by Customs and Border Protection, children were sent into the care of the Health and Human Services Department. Zero tolerance remains in effect, but Trump signed an executive order June 20 that stopped separations.
The president is correct, however, in saying that photos of children in holding cells were misrepresented online as showing the effects of Trump’s immigration policy.

The photos, taken by The Associated Press, were from 2014, during the Obama administration, and showed children who came to the border without their parents and were being housed at a Customs and Border Protection center in Nogales, Arizona. The photos were identified as such but wrongly described online as illustrating imprisonment under Trump. Various activists expressed horror about the scene until it was pointed out that Trump had nothing to do with it.
___
Associated Press writer Colleen Long contributed to this report.
___
Find AP Fact Checks at http://apne.ws/2kbx8bd
Follow @APFactCheck on Twitter: https://twitter.com/APFactCheck