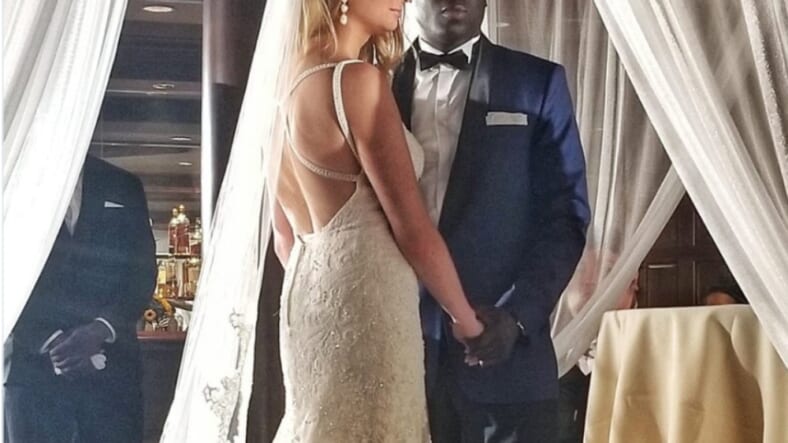 A couple looking to take a honeymoon cruise to celebrate their nuptials were met by a strange and jarring display of racism when they boarded the ship.

According to the Miami New Times, earlier this month, Laura Eka and her husband Ebong say that they were traveling from Barcelona on the ship when they discovered a blackface portrait on the MSC Seaview that stopped them in their tracks.

The painting was reportedly hung in a corridor that was unavoidable to passengers and featured a man in blackface, with exaggerated red painted lips, leering at a white woman in a red dress while grabbing one of her arms.

“This is what I’m seeing right now, in the middle of the Mediterranean sea, on our honeymoon,” Ebong posted on social media.

The man pointed the racist painting out to his wife, who also found it infuriating and deeply offensive.

“This decision wasn’t made in a vacuum,” opined Ebong. “There were multiple levels of approval, multiple people who said, ‘Yeah, these pictures should go here.”

Why do you think it’s ok to use “artwork” with blackface ??? #ThankYouForYourService MscIsRacist #Disgusting #Blacktwitter #Blackface your line is appalling. My husband Is black and this is what we were greeted with on our honeymoon. @MSCCruises_PR @MSCCruisesUSA pic.twitter.com/P0azagMNNF

Because Ebong is Nigerian, his wife says they felt particularly “unwelcome and uncomfortable” aboard the ship, adding, “You had to walk by it every day and remind yourself that you’re not welcome here.”

A spokesperson for MSC Cruises wrote in a statement emailed to New Times apologizing to the couple.

“We are aware a guest complained about this Belle Époque artwork, and as soon as we received such feedback, we immediately took action to remove the visual,” the statement reads, negating to explain how the artwork was approved, to begin with. “We’re sorry if this offended anyone.”

The interracial couples attempt to contact the cruise ship was initially ignored, which is what led Eka to take to Twitter to call them out.

“I tried to handle it privately at first,” she explains. “But they have refused to answer. It’s surprising to me that they haven’t responded at all.”

The couple says there was also a large group of Black Americans on the cruise who voiced their dismay as well. “They had their friends and family with them; it was a big group,” Eka says. “We were all talking about it. They were pretty upset too.”