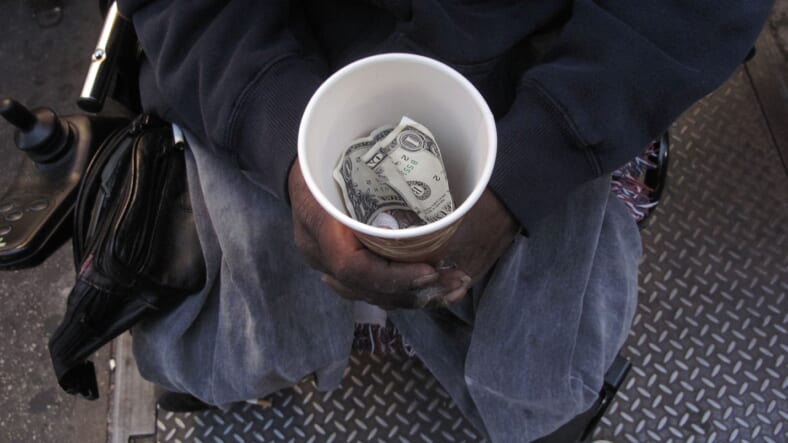 A homeless man who goes by the name Cleveland displays a cup containing money from panhandling on October 23, 2009 in New York City. (Photo by Spencer Platt/Getty Images)

On Friday night, family and friends gathered at Helping Hands Ministries to remember Jacquelyn Smith, the 52-year-old Baltimore woman who was fatally stabbed by a panhandler after helping a woman carrying a “Please Help me feed my Baby” sign.

As reported by The Baltimore Sun, Chaplain Robert Grayson spoke directly to Smith’s husband, Keith Smith, when he said: “Try not to be bitter. Do not let the spirit of anger and hate grip this family…. I walk those streets in Baltimore. I told my wife, what happened is going to change Baltimore.”

“She tried to help somebody,” said Lida Henson, one of the church ministers. “God is saying, ‘Well done, my good and faithful servant.”

Smith was reportedly in the front passenger seat of a car with her family when they stopped to help the woman cradling what they assumed was a baby. After handing her money, a Black male approached to thank them and then he allegedly “reached in to grab the female victim’s wallet when a struggle ensued.”

The male suspect then produced a knife and stabbed the victim in the torso before fleeing the area on foot with the female suspect who was holding the sign,” the police statement said.

Homicide detectives are currently working to identify both the male and female suspects.

“She was doing a kind deed,” said Derick Maull, a co-worker of Smith’s at Aberdeen

Proving Ground. “That is her legacy, one of kindness and care and concern. People die. Legacies do not die.”

“Jacqui’s tragic death has shaken this community,” said Bishop Roger L. Tatuem, senior pastor of Helping Hands. “Not just this community, but the entire world… People were touched who didn’t even know Jacqui. We have received phone calls after phone calls, people wanting to know: ‘What can we do? How can we help?’

“We are believers. We don’t stop giving. Don’t allow the spirit of fear to overtake you,” he said.

Mr. and Mrs. Smith met in 2013, at a birthday party of a mutual friend and he said it was love at first sight. He proposed that Christmas Eve, the report states.

“I like to say we danced our way to the altar,” Mr. Smith said during his speech about his wife.

“Me and my wife, we became one,” he said. “We became one in everything. That’s what happens when you find your soulmate. That was my everything. One day I’ll find peace within myself. Right now, I’m just healing…. Still, I’m going to honor my wife’s memory, and make sure my wife did not die in vain.”