Moore stars as the first Afro-Latino teen superhero in the Marvel franchise. 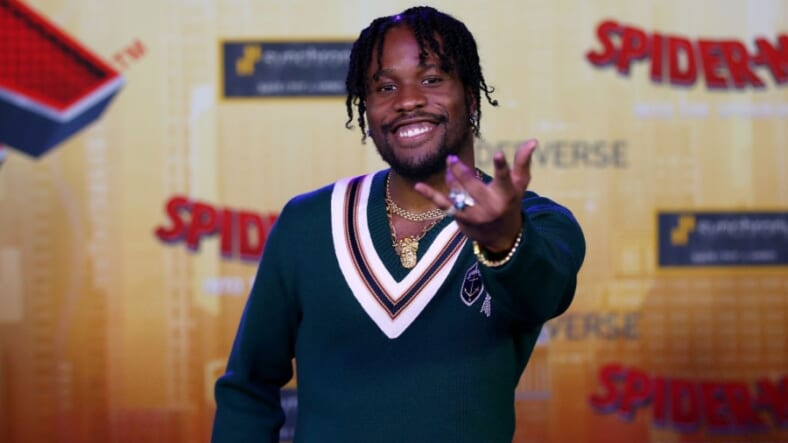 attends the world premiere of Sony Pictures Animation and Marvel’s “Spider-Man: Into The Spider-Verse” at Regency Village Theatre on December 1, 2018 in Westwood, California.

You’ve seen actor, singer, and dancer, Shameik Moore, tap into many different roles on the big screen. From Tyler Perry’s House of Pain to the critically acclaimed film Dope (2015). Now, the Atlanta native is tapping into his inner superhero and also making history as the first Afro-Latino Spiderman in the upcoming animated Marvel film, SPIDER-MAN: INTO THE SPIDER-VERSE.

Moore, who is of Jamaican descent, takes pride in his role as Miles Morales, a kid from Brooklyn who has to balance out being a high school student and a superhero.

The character Miles Morales has an African-American father and Puerto Rican mother.

SPIDER-MAN: INTO THE SPIDER-VERSE is more than just another Marvel film, like Black Panther, it is a reminder of the importance of representation and having young Black and brown children see a superhero that reflects them.

In a sit-down interview with theGrio‘s Deputy Editor Natasha Alford, Moore explained his journey to understanding.

Moore says it was an Afro-Latina actress at ComplexCon who made him realize that the role meant something special and had cultural impact.

“When she walked up to me, I thought she was about to flirt with me or something because it was in her eyes, you know,” Moore says with a laugh.

It’s estimated that there are millions of Afro-LatinX people around the world, whose ancestry and heritage stems directly from Africa.  While many speak Spanish or have a mix of cultural influences, racially they are black.

Moore says after his encounter he began to consider his pronunciation of Spanish words in the film and different aspects of culture.

What makes the role of Miles Morales even more special for Shameik Moore, is that he predicted having it years before he got it.

“[Miles Morales] made an appearance on Disney. When I looked at the character, first it caught my attention that he was Black. Then I noticed that the character looked exactly like how I looked that day.”

At the urging of his Dope castmate, Kiersey Clemons, Moore says he kept a journal for his future dreams.  He wrote that he would one day be Spider-man.

“I got the low fade and it looked like they took my picture and animated it,” says Moore. “I always felt like that was me on the screen. And then that stuck with me because while I was filming the movie Dope, I guess I was also thinking about my future and what else I wanted.”

Although Moore viewed Miles Morales as a reflection of himself, he learned in this experience that it’s not just about him.

“It’s all of us in our culture being represented and showed,” explains Moore. [It showed] me with great power comes great responsibility. Yeah, you were chosen [but] you need to think about who this character is and everybody he relates to …grown and young.”