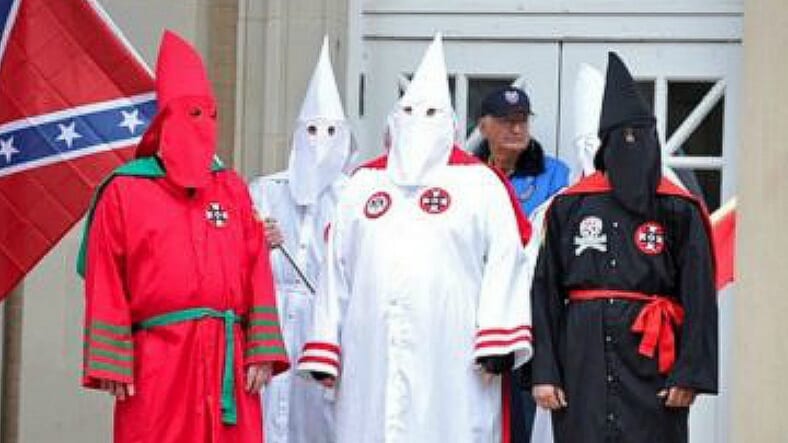 A popular high school play has sparked outrage in Phoenix thanks to a scene that brings students out in Ku Klux Klan robes.

Three students at the ASU Preparatory Academy in Phoenix dressed in KKK costumes came out during a scene in the performance of The Foreigner, a 1984 off-Broadway stage play set in rural Georgia. One of the pivotal scenes in the play is centered around the Klan taking over a meeting hall.

“Three students dressed as the KKK walked down the middle of the assembly as part of a play,” an anonymous parent said to Phoenix ABC affiliate KNXV. “They were in hooded robes.”

The Klansmen are part of the play, but parents say the characters could have easily been portrayed without ‘full regalia.’

The Foreigner and its Klan scene is no stranger to controversy. A Minnesota school canceled the production last year after images of their costumes went viral. The ASU Preparatory Academy apologized in a statement following the play.

“Last Friday, high school students in a drama class at ASU Preparatory Academy in downtown Phoenix staged a production of noted American playwright Larry Shue’s The Foreigner,” the statement said. “The play portrays an image of members of Klansmen in a brief scene toward the end in which they are made fun of and driven away.

“We apologize if anyone was caught by surprise with the appearance of these characters,” it continued. “We are confident that a fair reading of the text of the play, and a fair interpretation of the intentions of students who performed it, reveals no endorsement of bigotry.”

The play rubbed a number of people the wrong way because of the school’s diversity. An estimated 75 percent of the student body at ASU Prep is Hispanic, while 9 percent are African American.