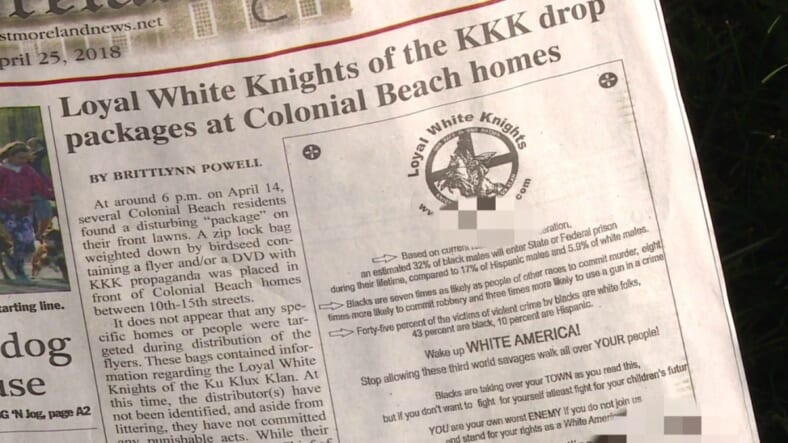 A Virginia newspaper is coming under attack after running a Ku Klux Klan flyer in its entirety on the front page.

The image on the front of the Thursday edition of The Westmoreland News was included to illustrate a story about how Klan recruitment fliers and DVDs were surfacing in Colonial Beach, Va.

Readers were incensed, saying it gave free publicity to the hate organization that advocacy groups say has increased in activity since the 2016 presidential election.

“They posted the whole flyer as if they were giving them free advertising,” Betty Tate Thompson of Colonial Beach told WTVR. “It even had the number … to contact the head of the KKK, which I thought was totally ridiculous.”

The newspaper ran a disclaimer that accompanied the image of the flyer.

“Westmoreland News in no way condones or supports the content or message of this flyer, nor does it condone or support any branch of the Loyal White Knights, or the KKK,” the disclaimer read.

Colonial Beach Police Chief Danny Plott told WTVR that he gave the newspaper the flyer to help the news organization report on the story, but he was disappointed with the decision to post the image on the front page.

Plott told WTVR that he telephoned editor Brittlynn Powell seeking an explanation. He said Powell told him she included the flyer to make a point to Colonial Beach residents “who may think there’s not racism” in the community.

“I think she didn’t expect for this to blow up the way it did,” Plott told the station.

The image has prompted readers and members of the public to air their complaints on the newspaper’s Facebook page and call for a boycott.

The page, which describes the Westmoreland News as “A Caring Community Newspaper Since 1948,” and includes the photo of a Black man that accompanied a March post about athletic facilities, now has so many complaints that its rating has been pulled down to 1.3 stars.

Wrote Margaret Lewis: “If the publisher/editor believed the publishing of the KKK information on the front page of the newspaper was to expose the radical racism in the community or the nation at large, there was a severe lapse of logic when allowing the phone number and other contact information to be distributed as well. I do not condemn the publishing of the KKK to expose it, I do condemn the lack of foresight in the way it was published.”

Wrote Susan Noble: “How disgusting that you would print such racist bigotry in your paper and you call yourselves a caring community paper since 1948. You should be ashamed of yourselves… Your complete lack of common sense, judgment, and brazen ignorance in publishing this encourages these sick individuals.”