Meet the two sisters behind the largest bar crawl supporting Black-owned restaurants and lounges in Brooklyn and Harlem. 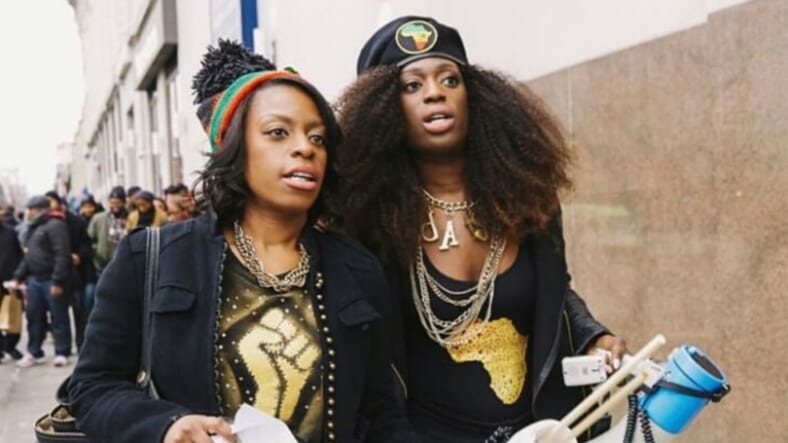 With gentrification at an all-time high in neighborhoods like Brooklyn and Harlem, Kwanzaa Crawl– founded by Kerry Coddett and Krystal Stark’s– is a one-day event where people of the African diaspora join together to support the Black-owned bars in their neighborhood. The event does not only contribute to keeping the Black dollar in the community and help the black-owned business continue to thrive; It’s also a celebration of Kwanzaa. During an interview with theGrio, the founders shared what inspired them to create the crawl three years ago.

“We created Kwanzaa Crawl in 2016 after so many consecutive police killings of unarmed Black men,” Kerry tells theGrio. “I remember we were sitting home like, ‘what can we do?’ I think we sit around and we think that somebody else is going to solve the problem. and then we realize we have to do something.”

At the time, Coddett and Stark formed a group called Operation Mobilize–which was a think tank that consisted of some of the smartest people they knew– to discuss ways to advance the situation of black people in America.

We realized that it’s two-fold,” says Krystal.”We need not only political power but economic power. And in order to get political power, you need money. So we decided that it makes sense for us to pool our resources and what better way to do that than with Kwanzaa.

The sisters never celebrated Kwanzaa prior to the Crawl, but while planning, they realized the significance and want to continue to encourage others to celebrate.

Thank you to everyone that participated in Kwanzaa Crawl this year! Check out this @kwanzaacrawl recap video. (PT. 1) Feat. @islimasongbird singing the Black National Anthem. ? @antoine_mclaurin_ #kwanzaacrawl #kwanzaacrawl2017

The founders’ share how Kwanzaa Crawl exemplifies the seven principles of Kwanzaa.

“Getting everybody on the same page to do an event of this magnitude. It’s hard. (Last year the crawl had 3,000 participants.”

“It’s us naming the event for ourselves, creating it for ourselves. It’s for us, it’s by us. In doing this event, we only wanted to partner with other black-owned businesses, to see what it looks like when Black people support each other all around.”

“We are pulling all of our resources together. The businesses that we work with are Black-owned, we are Black people and we are using our money to support Black businesses.”

“We want to be proactive about supporting our community. We don’t want to do it as a way to punish people. When there are issues like Prada or a major company does something that we don’t like, we decide to support black-owned businesses. We should be doing that anyway and that is something that should be done with intent and purpose.”

“This event of this magnitude hasn’t been done before. And when we started, we were hoping to get like 500 when we planned in two weeks. And we ended up getting 1600 people. It’s faith in actually believing that people can come together and do this and business owners having faith in us and that we are going to do what we said we would do.”

Kwanzaa Crawl is a day of UNITY, FELLOWSHIP, and FUN! To join the third-annual crawl,  Wednesday, December 26th, purchase tickets here. A portion of the proceeds will go to Barbershop Books, a nonprofit literacy organization in New York City.