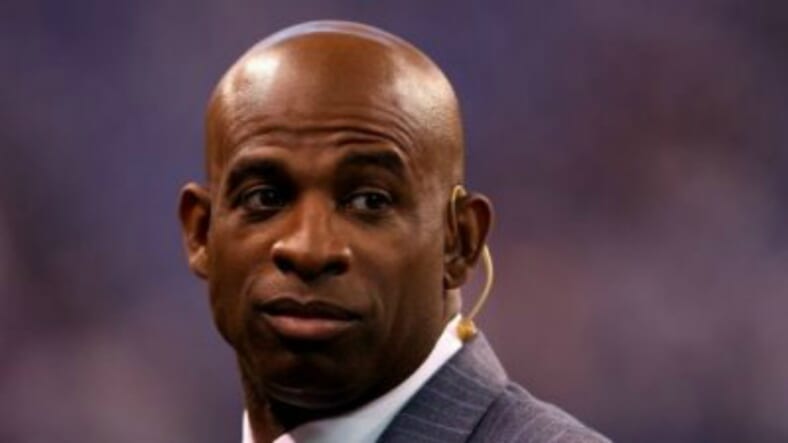 Deion Sanders of the NFL Network watches warmups on the field before the New England Patriots take on the New York Giants in Super Bowl XLVI at Lucas Oil Stadium on February 5, 2012 in Indianapolis, Indiana. (Photo by Elsa/Getty Images

Deion Sanders the flamboyant former football star and NFL Hall of Famer, who rode high with two Superbowl rings under his belt, details his life lows, including a suicide attempt, in an autobiography titled Power, Money & Sex: How Success Almost Ruined My Life, the Undefeated reports.

READ MORE: The many ways a black male student athlete was failed…just because of his dreads

While the autobiography has been around since the late 1990s, the resurgence of his story will be played out on January 31, 2019, in a new feature-length 30 for 30 documentary on ESPN, according to the website.

The film will take a close look at Sanders’ life when he played pro football and managed to play postseason baseball games in two different cities at the same time.

Sanders, known as “Primetime”  and now works as an analyst for the NFL Network, admits that he wasn’t always the happy-go-lucky guy that he’s known to be. He reveals that in 1997, his first marriage to Carolyn Chambers, who is the mother of two of his children Deion Jr and Deiondra, was on the outs. And it was the catalyst that propelled him to almost end it all.

“I was going through the trials and tribulations of life. I was pretty much running on fumes,” he said. “I was empty, no peace, no joy. Losing hope with the progression of everything.”

Sanders made a suicide attempt by driving his vehicle off a cliff, which dived 30- to 40-feet down. He survived and that eye-opening experience was enough for him to gain a newfound appreciation for life.

“I finally just got on my knees and gave it all to the Lord,” Sanders said.

“Slowly, but surely, I had to deal with my faith, deal with my strength,” Sanders said. “I had to get a lot of Word in so that I could fight off the enemy. I wouldn’t be where I am today without my faith. People argue about what faith is, and who Jesus is, but it works for me. I’m not going to sit here and argue about who is what, and what is what, I’m just going to say it works for me.”

READ MORE: First-grader helps to collect thousands of toys and gifts for families in need

Faith and guidance from his mentor Bishop T.D. Jakes, helped to center Sanders.

“No one had told me that life would be tough going from one team to another one,” Sanders said. “Going from the enemy’s team, being one of his soldiers, to God’s team. That’s a tremendous turnaround.”

Now, living a faith-based life is his guiding force.

“I don’t believe you can be at your optimum without your faith,” Sanders said. “Sports is sports, it’s a game. My faith is everything. It’s the gas that propels the courage, the truth, keeps me going. He continues: “It’s the wind, it’s the wings, it’s the air that pumps into my lungs, that provokes me to live. Faith is everything.”

And the 51-year-old admits he hasn’t strayed too far from his humble beginnings of being raised in a religious home by his mother Connie Knight, in Fort Myers, Florida.

The former Dallas Cowboys wide receiver, who also spent part of his career with the Washington Redskins and the San Francisco 49ers, plus baseball with the Kansas City Royals, said his partnership with Jahwar to join forces with Stand Together, an agency which focuses on helping youth gives him purpose.

“Finding someone that’s like-minded at this age and stage of my life is a delight to me,” Sanders said of Stand Together. “They give with no expectation, give from the heart. The want to fight domestic violence, homelessness, poverty, disenfranchised families. There’s so many things that they’re up against.”

The father of five to Deion Jr., Deiondra, Shelomi, Shedeur, and Shilo feels duty bound to spread the message of good will.

“What people call ‘in the ministry,’ I call it ‘in my will.’ I’m in God’s will,” he said. “I don’t really get down with a lot of titles, this and that. I believe I’m just in God’s will. If he called me to minister to a group, or setting, or whatever, that’s what it is. That’s what I’m gonna do. I don’t really desire a title to go and do what I’ve been called to do. I think it’s only right to go.”