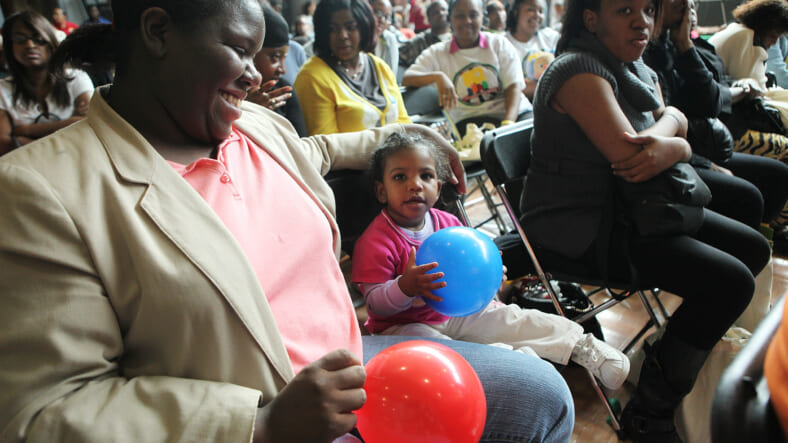 NEW YORK: General atmosphere at Weight Watchers “Fun And Fit In The City” at the Harlem Children’s Zone on October 10, 2009 in New York City. (Photo by Roger Kisby/Getty Images)

There’s outrage in a Harlem community after a report was released showing that area children were exposed to toxic levels of lead in a building where performing arts and health programs have been held.

The state-owned building is now reportedly undergoing a $2.2 million lead cleanup, The NY Post reports. The toxic metals have been known to cause severe mental and physical impairments in children, according to the Mayo Clinic.

The facility in question has been known as a community hub, housing some 1,000 kids a week at the Harlem Children’s Zone inside the Harlem Armory. The Zone runs health, fitness and performing-arts programs on West 143rd Street, the outlet reports.

State officials reportedly refuse to reveal their remediation plan or even pinpoint where exactly the lead contamination existed.

“Materials found for decades in hundreds of aging National Guard armories across the nation resulted in a 2016 Federal National Guard Bureau directive mandating that those materials be removed,” a spokesman for the state Division of Military and Naval Affairs said in a brief statement to The Post.

“I did not know they were doing lead removal at the armory — we should have known that they were doing it,” said state Assemblywoman Inez Dickens, whose district includes the former military facility.

“It’s disappointing because of the environmental impact that lead could have on senior citizens as well as children,” she said. Dickens vowed to launch an inquiry Monday.

Administrators who run the Harlem Children’s Zone said they were also unaware of the situation until the Post called and informed them.

Harlem charter school advocate Geoffrey Canada became CEO of HCZ in 1990 and gained international fame after the documentary “Waiting for ‘Superman,'” which examined the challenges facing the country’s education system, debuted in 2010.

Canada resigned as chief executive officer of Harlem Children’s Zone in 2014 but remained on the board, according to The Daily News.