Daniel Patrick Borden, 20, pleaded guilty to being one of several men who attacked DeAndre Harris inside the Market Street Parking Garage during the rally. 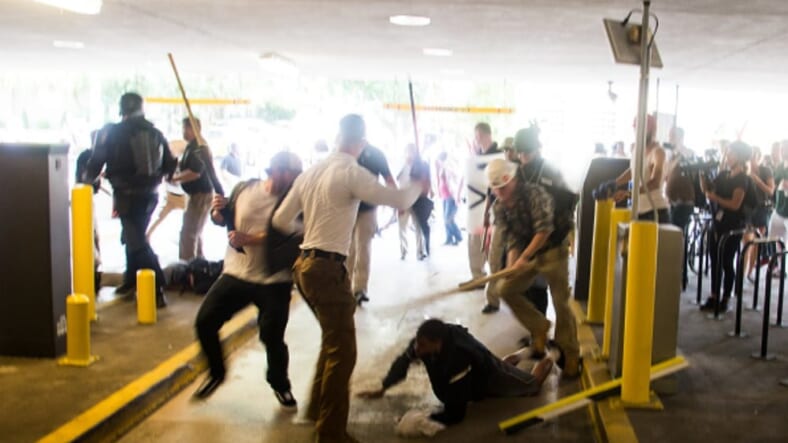 An Ohio man who beat up a Black man inside a Charlottesville parking garage during the infamous “Unite The Right” Rally in August in 2017 was sentenced to nearly four years in prison on Monday.

Daniel Patrick Borden appeared in the city’s Juvenile and Domestic Relations Court – the Charlottesville Circuit Court undergoing renovations—to find out his fate after the 20-year-old pleaded guilty to being one of several men who attacked DeAndre Harris inside the Market Street Parking Garage, according to NBC 29.

Circuit Judge Richard Moore on Monday sentenced Borden to three years and 10 months as part of a plea deal entered in May 2018. Although Borden did not admit guilt, he acknowledged the prosecution had enough evidence to get a conviction.

“This is one of the worst beatings I’ve ever seen as a lawyer or judge,” Moore said. Borden told Moore that, despite participating in a white supremacist rally, he is not a bigot and that he acted in self-defense.

Video of the beating during the August 2017 rally shows numerous white supremacist groups descended beating Harris with a wooden plank. Borden is shown in the video wielding a 2×4 and wearing a white hard hat with the “Commie Killer” written across the front.

Other men seen in the video used pipes and sticks to bash Harris as others watched the vicious attack. Harris suffered a broken wrist and required eight staples to the head.

He also offered an apology to Harris, who wasn’t present, and told the audience, “I’m truly sorry this happened to your town.”

The conviction comes after another Ohio man, James Alex Fields, was convicted of murder and sentenced to life in prison for that driving his Dodge Challenger into a crowd of anti-racism protesters, killing activist Heather Heyer and injuring more than a dozen others.