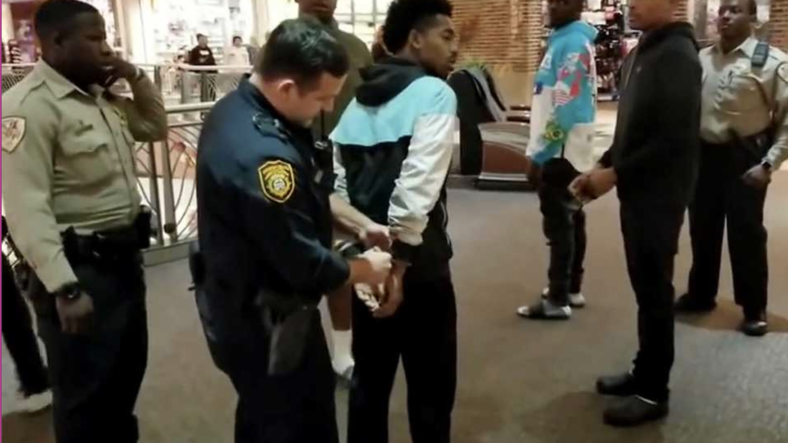 Kevin McKenzie and Montavious Smith (pictured) were arrested on November 3, 2018 at a Memphis mall over an incident that allegedly involved Smith and his friends wearing hoodies. (Screen grab Kevin McKenzie)

Charges have been dropped against two people at the center of the Memphis mall ‘hoodie arrest,’, thanks to a groundswell of support from Roc Nation.

—Two Black men, at the center of Memphis mall ‘hoodie arrest,’ prepare for their day in court—

On a cold evening in early November, 22-year old Montavious Smith was at Wolfchase Galleria Mall in Memphis, Tennessee with friends when they were reportedly stopped and told to remove their hooded sweatshirts and jackets based on a vague and non-existent policy that considers neither “appropriate attire” for the mall.

Smith, and an African-American journalist who recorded the confrontation with police, were both arrested and charged. After widespread backlash, prosecutors dismissed criminal charges against Smith and retired journalist Kevin McKenzie Thursday, the Commercial Appeal reports.

Jay Z’s Roc Nation division Team ROC—dedicated to fighting against racial injustices—helped Smith and McKenzie fight their cases by hiring high-profile attorneys who took up the cases pro bono, according to Complex. Rapper Yo Gotti was also tapped to publicly speak out against the arrests. ROC representatives also reportedly met with mall officials about enacting changes to the dress code policy.

Now the policy states “hoodies are acceptable as long as the guest’s face remains visible.”

Dania Diaz, Roc Nation managing director of philanthropy, said the “hoodie arrests” case is just the tip of the iceberg for the organization.

“The athletes and entertainers that we represent are passionate about standing up to injustice, so the formation of Team ROC is a reflection of our commitment to those causes,” she said in a statement.

“Our goal is to use our shared resources to combat injustice and amplify the need for universal equality, so we’re glad to have rallied around Montavious in his time of need and we’re thrilled that the charges against him have been dismissed. We’re also incredibly appreciative of Chidi Achara—from the Simon Property Group—for collaborating with us to champion changing policies.”

The Grio spoke with both men after the incident. Smith said the police’s actions felt racially targeted and he imagined this is what it felt like to be Black during the Civil Rights era.

“Things are still the same in spite of the things that happened in the past,” Smith said in an exclusive interview with theGrio. “…how is it that we’re still getting the same treatment?”

McKenzie, who saw Smith being arrested, said the two men were treated like “criminals in waiting.”

“I am primed to stand up,” said McKenzie from his home in Memphis. “With the rise of Trump, the Alt-Right and an above board embrace of racism at the highest levels of this country… the power of video cameras [on a phones] have shown white America what Black America has always known. They can either believe or never believe, but with a video, the camera doesn’t lie.”