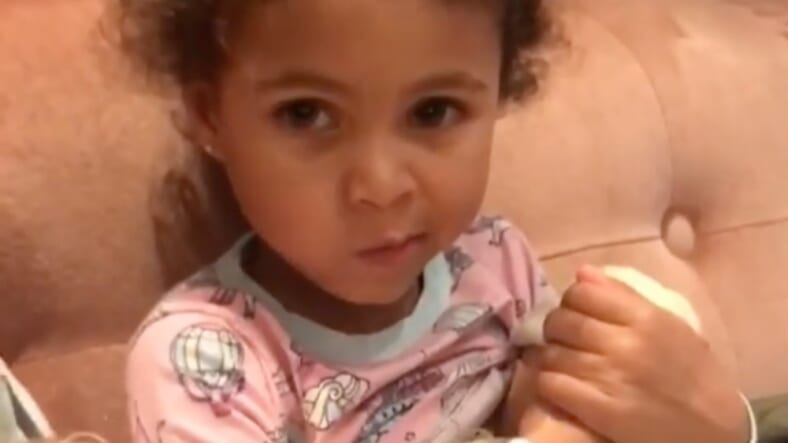 Marjorie Harvey was recently forced to defend a video which should have sparked high-fives and fist bumps.

Instead, the Instagram video featuring her two granddaughters pretending to breastfeed their dolls, received thousands of negative comments and has nearly 500,000 views. It seems like people have forgotten that the reason humans are called mammals, is because female breasts are actually mammary glands made for feeding human offspring.

Because our society has hyper-sexualized breasts—repeatedly using them to sell chicken wings and beer—it has caused us to forget their primary biological function. Too many people only see the breast as a sexual organ so when they see a child pretending to breastfeed, they think of something sexual not biological and that’s a huge problem.

The fact is, we should all hope that more young girls, especially Black girls, play-play breastfeed their dolls. In general, the toy industry has done a good job raising generations of young girls on baby dolls with bottles, disconnecting us from our biological norm and distorting what is normal feeding. But this is especially dangerous in the Black community, where breastfeeding rates are lower than among white women—a racial disparity that has lingered for over 40years. As a result, Black mothers and infants miss out on the proven health benefits of breast milk. According to the most recent CDC data, only 17% of black infants were still breastfeeding at 12 months while 30% of white infants, nearly double, did meet that standard.

Breastmilk has unparalleled immunological benefits, lowering the risk of asthma and allergies. Exclusively breastfed babies have fewer ear infections, respiratory illnesses and diarrhea. And while childhood obesity still hits our community hard, studies prove that breastfed children are less likely to be obese because nursing infants learn to eat from their feeding cues and stop when they are full. A mother’s milk changes flavor based on the mom’s diet so breastfed babies are also more likely to try different foods as they mature because they’ve already been exposed to different flavors from infancy, as opposed to infant formula which tastes exactly the same all the time.

Breastfeeding is also integral to reducing the devestating Black infant mortality rate. Studies show that even college educated Black women disproportionately have babies who are born too small, too sick or too soon and never survive to their first birthday due to complications related to their birth size and weight. Black babies experience nearly four times as many deaths related to short gestation and low birthweight. For those babies, breastmilk can be a lifeline for underdeveloped guts and compromised immune systems. Black preterm infants, compared with white infants are three times more likely to suffer from necrotizing entercolitis (NEC) and twice as likely to die from it. And years of research proves that breastmilk significantly reduces the risk of NEC.

Mothers benefit too. Studies prove that extended breastfeeding reduces the risk of ovarian and breast cancers. That’s particularly important since Black women have a higher death rate from breast cancer and are more likely to get an aggressive form.

You get the point.

“The toy industry has provided bottles for generations of girls without any pushback,” says Vanessa Simmons, founder of the Normalize Breastfeeding Movement.  “We can’t let industry decide what our bodies can be used for when in fact breastfeeding is the biological purpose of the breast,” add Simmons, who remembers her own daughter getting very upset when she lost her doll’s bottle and being frantic because she couldn’t “feed” her. “I showed her how to put her baby to her breast and she was immediately relieved. Our bodies can take care of our babies. That’s not a profit-friendly message, but it’s the truth,” says Simmons, a photographer who organizes the International Day to Normalize Breastfeeding every year in June.

We all need to wake up to the ways commercial interests shape our ideas of what is normal, mostly based on what sells. How many of those commenters criticizing Marjorie’s video would be as outraged to see the same young Black girls twerking? Or to see breasts pushed up and out in a music video?

For breastfeeding to be normalized in the Black community we need it integrated into every aspect of our lives, from our children’s play to their science lessons. All boys and girls should learn the biological function of the breast, long before they are introduced to its sexual nature. As Black women, we have to reclaim our bodies so that when we decide to breastfeed we are not shamed by our family and friends.

So thank you Marjorie Harvey for being a powerful demonstration of how we can normalize breastfeeding while Black and spark an important preventative health trend in our community.

Kimberly Seals Allers is an award-winning journalist, maternal and infant health advocate and a co-founder of Black Breastfeeding Week. A former senior editor at Essence, she is the author of The Mocha Manual series of books (HarperCollins) and most recently, The Big Letdown—How Medicine Big Business and Feminism Undermine Breastfeeding. Follow her on Twitter and Instagram at @iamKSealsAllers.