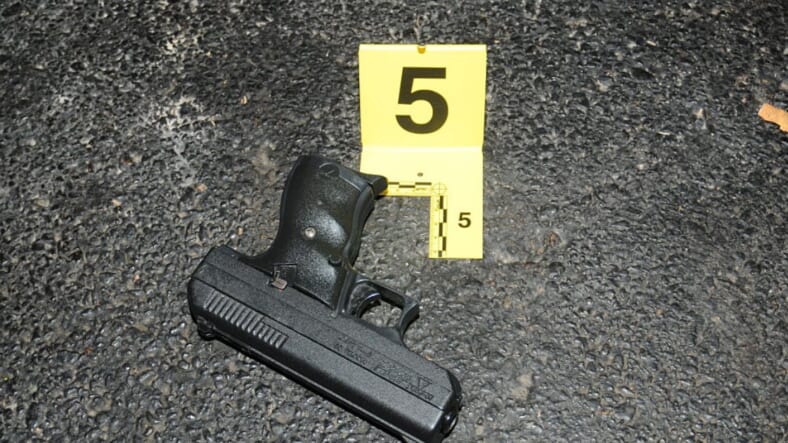 According to AllHipHop, several people called 911 to report that gangs were planning something in downtown LA. The police were notified that there were rappers carrying large amounts of loot and wearing expensive jewelry in the area at around 7 p.m. The immediate concern, according to police, was that gangs had robbed the area in recent weeks and the rappers were easy targets.

When the LAPD arrived, Jonathan Porter, known professionally as Blueface Bleedem or just Blueface, he and his friends took off running, with several of them allegedly ditching their guns as they ran. Cops caught Blueface and two others and apprehended them when it was discovered that they had loaded guns.

Blueface was booked for felony possession of a loaded firearm, and was later released on $35,000 bail. Here is a video of the arrest.

The California rapper was signed to Bryan “Birdman” Williams’ Cash Money Records’ West Coast imprint, known as Cash Money West, last November. He posted pics to his Instagram page of him in the studio with Drake and Quavo. Blueface went viral for his unique high-pitched voice and style after the release of a video for his song “Respect My Crypn” through WorldstarHipHop‘s YouTube channel. He also is the rapper behind “Thotiana” and “Next Big Thing.”

—Reggie Bush calls out Goodell, says he is ‘wrong’ about Kaepernick—

A few months ago, Porter also had a run in with the law. On November 16, the rapper was at a Chevron gas station, when he was approached by a man who tried to rob him. Blueface fired shots at the man’s vehicle and was later arrested and charged with shooting at an occupied vehicle, which is a felony in California. In that incident, Porter was released on $50,000 bail.