The school has offered an apology, but says what seem like pictures of students in blackface are actually "blueface" 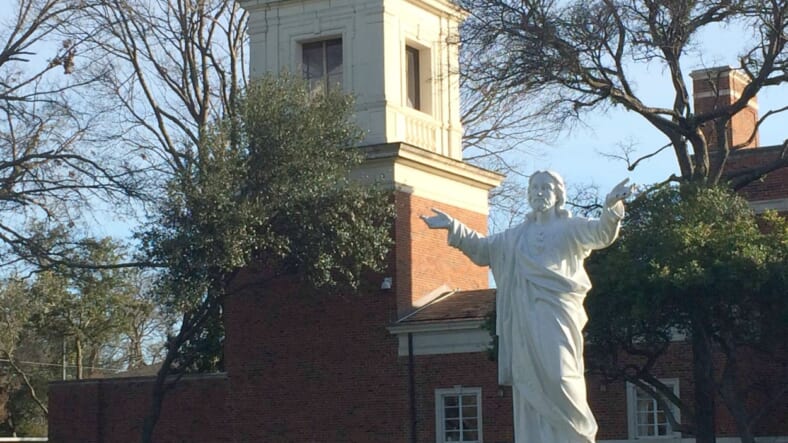 A 40-year-old high school yearbook has emerged as another part of the recent modern blackface controversies around the country. This time, Ursuline Academy of Dallas is apologizing and trying to explain photographs of what students called “Senior Slave Day.”

READ MORE: Teachers under fire for posting photo of ‘back to school neckties’ depicting nooses

The offensive photos stemmed from the Catholic girls school’s 1979 yearbook and appears to show an auction type fundraiser where senior and teachers sold themselves, The Dallas Morning News reports.

“Slaves were at their master’s command for one entire day,” says a caption on a photo.

“The slave trade became legal for one last time … as the Senior class members sold themselves along with thirteen brave and courageous teachers,” a caption read in the yearbook, titled Acres.

There were two white students featured with blackened skin in one of the photos.

The school released a statement by its president, Gretchen Z. Kane but also tried to explain the context, saying that students were in “blueface” in its statement.

“The following statement is in response to recent conversations on social media and questions from our constituents regarding Page 193 of the 1979 edition of Acres, the Ursuline Academy yearbook, which shows students, including two in “Blueface,” and teachers at a student fundraising event entitled “Senior Slave Day”:

Unquestionably we regret this awful incident in our school’s history, and we sincerely apologize for the distress it has caused our students, our alumnae, and others in our Ursuline community.

Ursuline Academy is a place where we strive, each day and in every way, to be sure every single student feels she belongs. We are extraordinarily proud of our student body, more than 850 young women of many faiths, ethnicities, and socioeconomic groups.

We are a family characterized by inclusion and community. These values are fundamental to our mission as an educational institution and as a center of culture and faith.

Nevertheless, there is no question that what we see as unacceptable today should have been unacceptable 40 years ago. We are truly sorry.”

“I have so many questions,” said Nicole Johnson, a 2016 graduate of the school in a Facebook post. “This is unacceptable.”

This comes as the Virginia Gov. Ralph Northam, faces widespread calls to resign in the wake his recent blackface scandal. He drew even more ire on social media Sunday for referring to the first Africans brought to his state as “indentured servants,” while talking about the 400th anniversary of the first Africans’ arrival to his state in an interview with CBS News’s Gayle King.

“We are now at the 400-year anniversary — just 90 miles from here in 1619,” Northam said. “The first indentured servants from Africa landed on our shores in Old Point Comfort, what we call now Fort Monroe, and while …”