Senator Cory Booker on his choice for VP: ‘I’ll be looking to women first’ 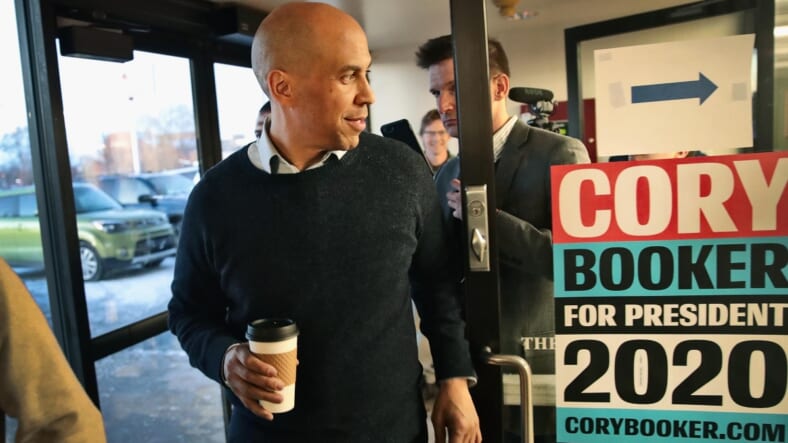 U.S. Senator Cory Booker (D-NJ) speaks during a campaign stop at the African American Museum of Iowa. He recently disclosed that he will likely chose a woman as his running mate for VP. (Photo by Scott Olson/Getty Images)

When it comes to picking a running mate, Democratic presidential candidate Senator Cory Booker has made it clear that choosing a woman is a very real, and even preferable, option for him.

According to CNN, during Tuesday’s broadcast of MSNBC’s The Rachel Maddow Show, the New Jersey Senator sat down for three-segments, discussing a range of issues such as criminal justice reform, the impact of Trump’s attorney general nominee William Barr, and his, what some might call, “overly optimistic” view of politics .  .

READ MORE: Teachers under fire for posting photo of ‘back to school neckties’ depicting nooses

Near the the end of the sit down, host Rachel Maddow mentioned the wave of female candidates that have stepped up in the Democratic party.

“Let me ask you about the big field you’re joining,” began Maddow. “A lot of women, and especially a lot of your women Senate colleagues  are already running. You are blessed among women in the field right now.”

“If you got the nomination, would you commit to choosing a woman as your vice presidential running mate?” Maddow asked.

“I think it would be malpractice, I’m not going to make any specific commitments,” Booker said, but then added that “we have such a great field of leaders, I think you’ll rarely see a Democratic ticket anymore without gender diversity, race diversity. I think it’s something we should have.”

“I’m not going to box myself in, but should I come to it, you know I’ll be looking to women first,” Booker said.

“Look, we have great people running,” Booker replied when asked about the coming primary campaign. “This is actually an abundance of riches for the Democratic Party. I hope whoever wins, we all support.”