In the turmoil that has erupted in the Caribbean nation, several, including five Americans have been arrested for criminal activity involving a cache of weapons 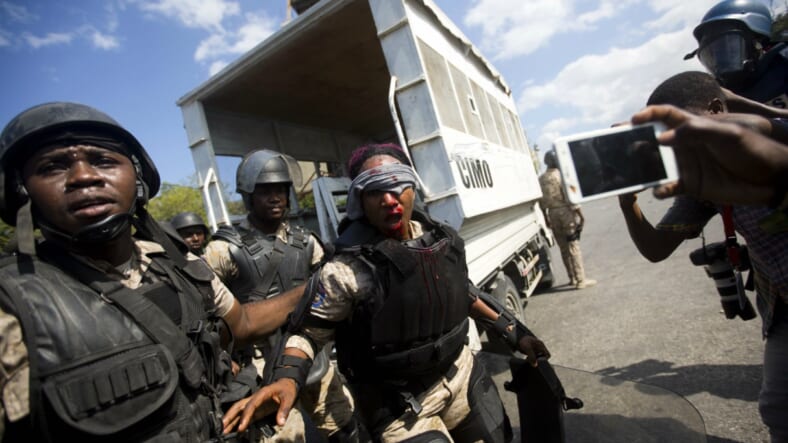 A national police officer is helped by fellow officers after she was hit in the face with a rock thrown by protesters demanding the resignation of Haitian President Jovenel Moise near the presidential palace in Port-au-Prince, Haiti, Wednesday, Feb. 13, 2019. (AP Photo/Dieu Nalio Chery)

As anti-government protests continue in Haiti, the country’s Foreign Minister Bocchit Edmond confirmed Monday that five Americans are among those arrested, the International Business Times reports.

The Americans were accosted along with eight other “heavily armed” men who reportedly were detained after a cache of automatic weapons were found along with communications equipment such as drones, satellite phones and other war equipment, the website reports.

“The group of eight men has five US citizens, a Serb, a Russian and a Haitian. The first charge against them is illegal possession of weapons and the second is criminal conspiracy,” police told local media Liberation.fr.

The men were identified as Kent Leland Kroeker, Bajavic Danilo, Vlad Jankovic, Burton Talon, Christopher Osman M, Daniel Dustin and Estera Michael and were taken to Port-au-Prince to be questioned.

Video of 7 US citizens and a Haitian being held at main police station in downtown PAP, #Haiti. They were detained after a cache of automatic weapons, communications equipment and several license plates were found in their vehicles. Why they were stopped is unknown. pic.twitter.com/YvCxaULWIo

One of the men held is reportedly a U.S Marine Corps officer.

Lots of good sleuthing from our Followers. For example here's background on one of the US passports. pic.twitter.com/HBNPyD14Ga

“The central management of the judicial police will take charge of them to deepen the interrogations,” the police said.

Haiti has been embroiled in deadly protests since February 7. Haitians have been reportedly committing violent acts, fire-bombing vehicles and having run-ins with police.

They are protesting and calling for its President Jovenel Moise and the prime minister to resign.

“Protests, tire burning and road blockages are frequent and unpredictable,” an advisory from the State Department stated. “Violent crime, such as armed robbery, is common. Local police may lack the resources to respond effectively to serious criminal incidents, and emergency response, including ambulance service, is limited or non-existent.”

The State Department has also cautioned for all “non-emergency US personnel and their families” to leave Haiti. The country reportedly has “limited ability to provide emergency services to US citizens in Haiti.”

“Do not travel to Haiti due to crime and civil unrest,” the department advised Americans in its Level 4 warning. “There are currently widespread, violent, and unpredictable demonstrations in Port-au-Prince and elsewhere in Haiti. … Protests, tire burning, and road blockages are frequent and unpredictable. Violent crime, such as armed robbery, is common. Local police may lack the resources to respond effectively to serious criminal incidents, and emergency response, including ambulance service, is limited or non-existent.”