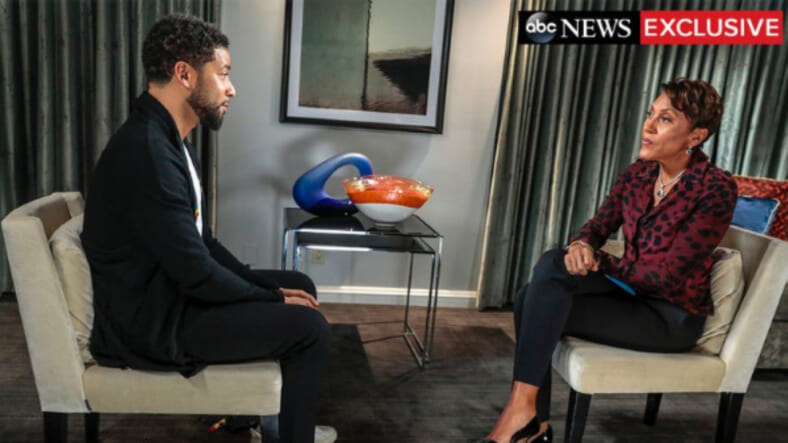 Jussie Smollett spoke with Robin Roberts on GMA for his first TV interview since his assault in Chicago. (ABC News)

Good Morning America co-host Robin Roberts was accused of going easy on Jussie Smollett during their interview last week about his alleged attack.

On Monday’s show, Roberts addressed her conversation with the Empire star and noted that Chicago police believed Smollett’s account of what happened to him was credible.

“When I sat down with Jussie it was Tuesday night in Chicago, at the time to give his first account, publicly give his first account of what he said happened,” Roberts said. “At that time, on Tuesday, police officers were saying that his account was consistent, it was credible, and that he was being cooperative. This was all before the interview aired on Thursday, and then we found out about the brothers.”

Roberts said “police often say something publicly” but have other theories behind the scenes.

During the interview that aired Thursday, Smollett expressed frustration about not being believed by the court of public opinion.

“It feels like if I had said it was a Muslim or a Mexican or someone black I feel like the doubters would have supported me a lot much more,” he said. “And that says a lot about the place where we are as a country right now.”

“I never said that,” the told Roberts. “I didn’t need to add anything like that. They called me a f****t, they called me a n****r. There’s no which way you cut it. I don’t need some MAGA hat as the cherry on some racist sundae.”

Meanwhile, Media Research Center analyst Kristine Marsh called out Roberts for not referring to the attack as “alleged” and instead handled Smollett “as if he were a martyr, with fawning questions.”

“Roberts came to Smollett’s defense, at one point, telling her fellow anchors that his story was ‘credible,’” Marsh wrote.

ABC News legal analyst Dan Abrams believes comments the entertainer made during the interview could be used against him if it’s determined that the entire crime was one big hoax.

“In that interview, [Smollett] specifically says, ‘Yeah, those two guys on the surveillance footage, those are the guys that attacked me,’ so now he’s sort of boxed in,” Abrams said.

Smollett claims that two masked men attacked him on Jan. 29 while he walking to his apartment. They allegedly hurled racial and homophobic slurs at him, poured bleach on him and tied a noose around his neck.

“Roberts gave Smollett a soft platform to spin his tall tale less than 24 hours before it was blown to pieces,” NewsBusters managing editor Curtis Houck wrote. “They wanted to give him the benefit of the doubt.”

When Robins asked Smollett about folks doubting his version of events, he replied: “At first it was a thing of like, listen, if I tell the truth, then that’s it — cause it’s the truth,” he said. “Then it became a thing of like, oh, how can you doubt that? Like how do you not believe that? It’s the truth.”

As TheGrio previously reported, law enforcement sources connected to the investigation tell TMZ that they are keeping a close eye on the two Nigerian brothers who were arrested and questioned in connection to the alleged hate crime. According to published reports, police suspect Smollett paid the brothers to orchestrate an assault on him but his attorneys refute these allegations.

The brothers were released without charges after investigators discovered “new evidence” that shifted the “trajectory of the investigation,” BBC.com reports.