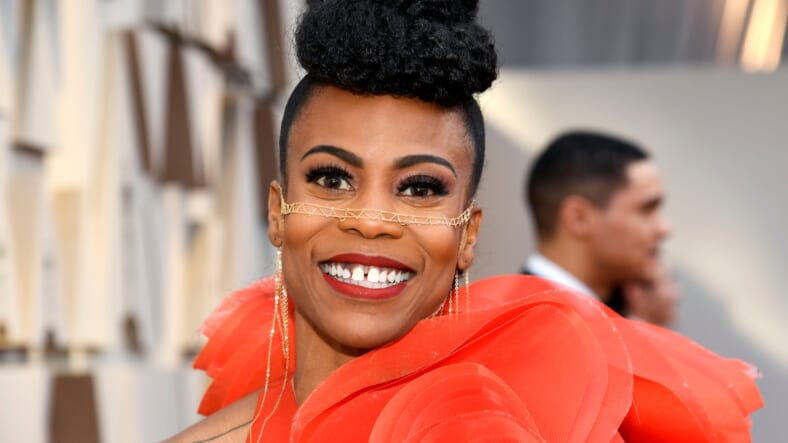 Production designer Hannah Beachler just took home another major win for Marvel’s Black Panther, and an even bigger win for Black women, by snagging the award for “Best Production Design.”

The award was presented by Jennifer Lopez and Captain American actor, Chris Evans. Beachler humbly accepted her award alongside fellow designer Jay R. Hart. Opening up her speech with “New Orleans, you heard me?!” Beachler went on to give an emotional show of gratitude to Black Panther director, Ryan Coogler:

“I stand here stronger than I was yesterday. I stnd here with [ ] and self-worth because of Ryan Coogler, who not only made me a better designer, a better story teller, a better person, I stand here because of this man, who offered me a different perspective of life. Who offered me a safe space, who is patient, and gave me air, humanity and brotherhood. Thank you Ryan, I love you,” Beachler cried tearfully.

She then wrapped up her speech with a huge show of love to Marvel and her family, while also giving a piece of advice for aspiring creatives everywhere:

“I’m stronger because of Marvel, who gave me the opportunity to do my best, who supported the vision of this film and lifted us up every day.

I’m stronger because of my family who supported me through the roughest of times. I give the strength to all of those who come next, to keep going, to never give up. And when you think it’s impossible. Just remember to say this, a piece of advice I got from a woman, ‘I did my best, and my best is good enough.’ Thank you!”

—The 2019 Academy Awards: #BlackExcellence in all its glory on the red carpet—

Before Black Panther, Beachler was best known for her work on the 2015 Rocky film Creed, the Miles Davis biopic Miles Ahead, Moonlight and of course, for providing the epic visuals to Beyoncé‘s 2016 Lemonade album.