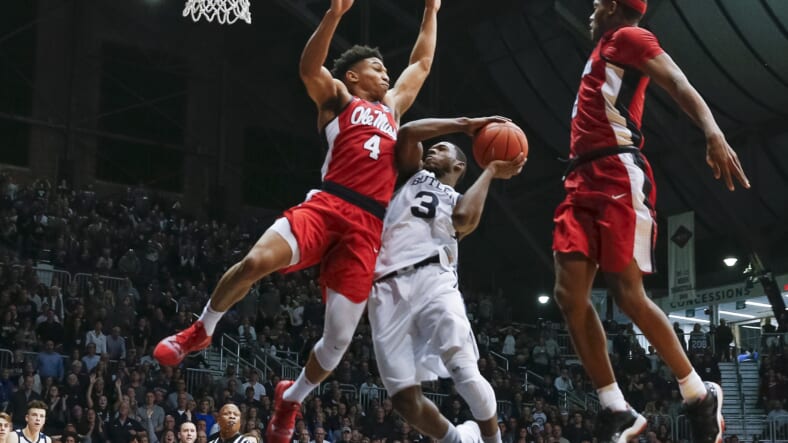 Eight players on the University of Mississippi’s basketball team have been dubbed heroes by social media users, after they took a knee during the national anthem at their home on Saturday.

The move was in response to a pro-Confederate rally that was going down on campus, The HuffPost reports. Video shows the team players -ironically known as “Rebels”- bow their heads and kneel down as the anthem is performed at The Pavilion stadium, while at the same time, protesters from Confederate 901 and Hiwaymen were gathering to march about a mile away.

Coach Kermit Davis defended the players who knelt during the national anthem.

“This was all about the hate groups that came to our community and tried to spread racism and bigotry … in our community,” Davis said during in post game press conference after the Rebels’ 72-71 win over Georgia.

“It has created a lot of tension for our campus. I think our players made an emotional decision to show these people they aren’t welcome on our campus, and we respect our players’ freedom and ability to choose that.”

Top guard Breein Tyree didn’t participate in the silent protest, but noted during the press conference that those who took the knee did so because they were “tired of these hate groups coming to our school and portraying our campus like it’s our actual university having these hate groups in our school.”

He said later in a tweet that they “meant no disrespect,” but “we had to take a stand to the negative things that went on today.”

To the people that fight for this country, my teammates and I meant no disrespect to everything that you do for us, but we had to take a stand to the negative things that went on today on our campus. #WeNeedChange

“Our job is to teach and educate every single day,” Bjork said. “They’re human. They’re students. They see what’s happening on our campus. These people that come here and they spill hate and bigotry and racism, we don’t want them on our campus. Our players stood up for that.”

“We talked to them about that in the locker room. We support them because we don’t want those people here either. The university doesn’t want them. Our town doesn’t want them. They’re out-of-state. They’re not from here. So good for the players to stand up and make a statement.”