Spike Lee just won his first Oscar and delivers an epic speech: “Do the right thing!” 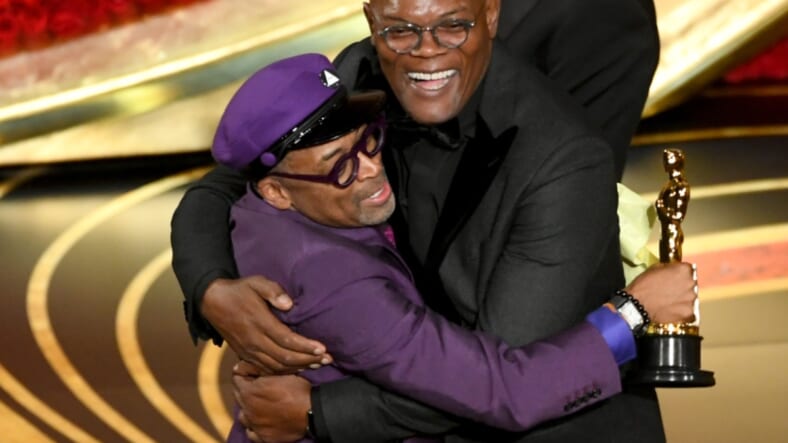 Director Spike Lee just took home his first-ever Oscar for BlacKkKlansman, and the moment was nothing short of amazing.

On Sunday, Lee won the coveted category for Best Adapted Screenplay at the 91st Annual Academy Awards. The 61-year-old director took to the stage to accept the award and give a dynamic speech, but not before jumping into the arms of longtime co-star and presenter, Samuel L. Jackson.

Spike kicked off his memorable speech with a quick lesson in all things history, her-story, and irony, too.

“The word today is ‘Irony.’ The date- the 24th. The month, February, which also happens to be the shortest month of the year. Which also happens to be Black History Month.
The year, 2019, the year 1619, history, her-story, 1619 to 2019, 400 years, our ancestors were stolen from Mother Africa and brought to Jamestown Virginia and enslaved.”

Lee then gave a heartfelt ode to his family tree and fellow African and Native-American ancestors.

“My grandmother, who lived 100 years young, who was a Spelman College graduate, even though her mother was a slave. My grandmother who saved 50 years worth of Social Security checks, to put her first grandchild- she called me “Spikey Poo,” she put me through Morehouse College and NYU Grad Film. N-Y-U!

However, it wouldn’t be a Spike Lee moment if the renowned director didn’t use his platform to talk politics. Spike wrapped up his speech by urging viewers to “Do the right thing,” a nostalgic nod to his famous 1989 movie of the same name.

“The 2020 presidential election is around the corner. Let’s all mobilize, let’s all be on the right side of history. Make the moral choice between love versus hate. Let’s do the right thing!”

Lee is also nominated for “Best Director” and “Best Picture.” In 2015, he received an honorary Oscar Award for being  “a champion of independent film and an inspiration to young filmmakers.”