The Civil Rights attorney wants Black and Hispanic women to come forward if you have health issues from using talc. 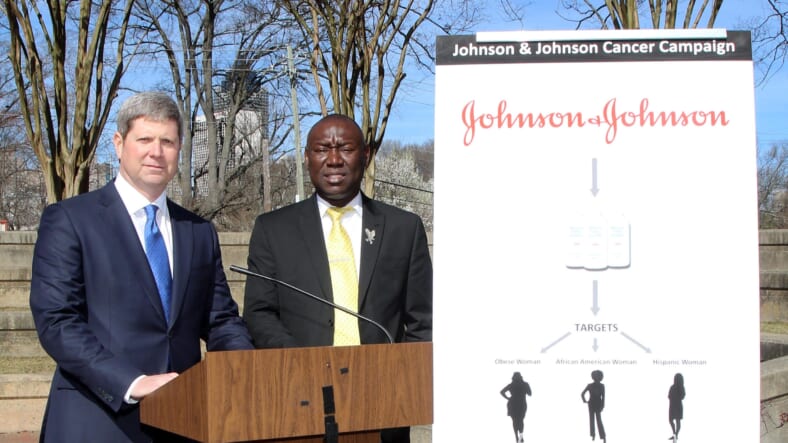 Attorney R. Allen Smith of Smith Law Firm, PLLC and civil rights attorney Benjamin Crump have joined forces to pursue litigation over the manufacture and marketing of talc, including the way companies like Johnson and Johnson market their products with a laser focus on Black and Latino women.

Crump and Smith hosted a press conference in Atlanta on Monday at Atlanta’s Ebenezer Baptist Church Amphitheater along with Janice L. Mathis, Esq., the executive director of National Council of Negro Women (NCNW), the oldest advocacy group for minority women, not only to alert women of color, but to look for women who may be suffering as a result of using this product.

Crump and Smith are going on the road, traveling throughout the country, to find and speak to women, educating them about this issue.

Smith, who is from Ridgeland, Mississippi, has taken on similar talc cases on behalf of several plaintiffs and was recently retained to represent Mississippi in seeing civil fines against the company.

In July 2018, a Missouri jury ordered Johnson & Johnson to issue a payment of up to $4.7 billion to 22 women that claimed their ovarian cancer diagnoses were directly related to the company’s baby powder.

The group was also at Ebenezer Baptist Church Amphitheater to discuss the evidence that shows a direct correlation between ovarian cancer and the use of Johnson & Johnson’s baby powder.

“We have to protect our women of color,” said Crump said. “There is evidence that Johnson & Johnson preyed on women of color while possessing scientific reports that showed a linkage between talcum powder and ovarian cancer.”

During the press conference, Allen explained that his team is in possession of multiple documents that prove that Johnson & Johnson deliberately targeted Black, Hispanic, and obese women to increase their sales, knowing full and well that Black women are prone to ovarian cancer at higher levels when using baby powder in their genital areas.

Crump believes Johnson & Johnson engaged in “cynical tactics to market these products to women of color, while knowing their potential harm.”

“Johnson & Johnson devalued Black lives by expressly marketing a product to black customers that they knew for decades to be harmful,” said Crump. “Given that many Black workers’ retirement funds depend on government pension funds that invest in this stock for their retirement, Johnson & Johnson victimized them twice, jeopardizing their physical and their financial health.”

If you’re a woman of color who believes your cancer diagnosis is directly linked to the use of Johnson & Johnson’s baby powder, contact Attorney Crump, at (800) 395-5454. or fill out the free case evaluation form at bencrump.com/contact/.