Maryland delegate apologizes for use of n-word, but won’t resign

Mary Ann Lisanti says she doesn't 'believe' she used the slur, but said quitting would be the 'easy way out' 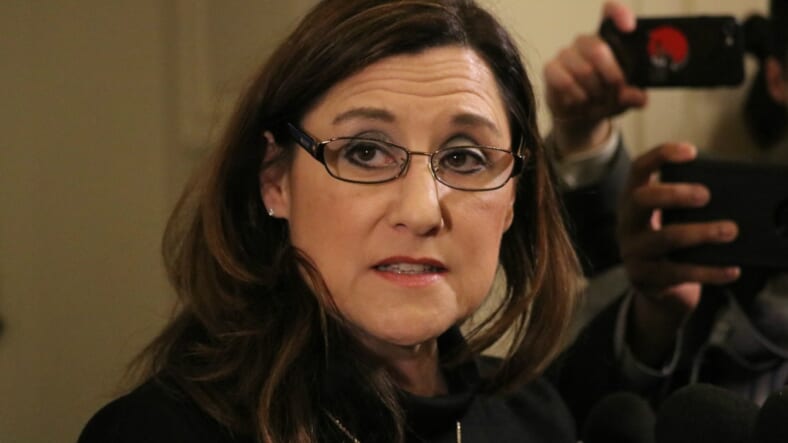 Maryland Del. Mary Ann Lisanti talks to reporters after the House of Delegates voted to censure her on Thursday, Feb. 28, 2019 in Annapolis, Md., for making a racial slur about a majority-black county. (AP Photo/Brian Witte)

Maryland state lawmaker Mary Ann Lisanti was censured on Thursday by the House of Delegates for her use of a racial slur, which members said “brought dishonor to the entire General Assembly of Maryland.”

The resolution was drafted by House Speaker Michael Busch and Del. Kathleen Dumais, the majority leader for the Democrats.

“This is a sad day for the House of Delegates when we have to act to censure one of our own. … With this vote, we are saying as a body that racial slurs and racially charged language cannot and will not be tolerated,” said Dumais, a Montgomery County Democrat, according to The Baltimore Sun.

The resolution stated that African-Americans make up 30 percent of the state’s population and 57 of the 188 members of the General Assembly.

After the vote to censure, the 51-year-old, Harford County Democrat said she won’t be resigning despite numerous calls for her to do so by the governor, House leaders, the Legislative Black Caucus and many of the constituents in her largely minority district.

She also made confusing comments about whether she realizes the term she used was offensive to African-Americans. When a reporter questioned whether she had said it, Lisanti responded: “I do not believe I did, but I am still accepting responsibility,” according to The Sun.

Lisanti said resigning would be “an easy way out” and not the right thing to do.

“I recognize that some have rushed to judgment without information and freely jumped on the bandwagon of condemnation — likely for their own political expediency,” Lisanti told reporters, according to The Sun.

Lisanti reportedly used the n-word while attending at an event in January at an Annapolis bar, The Washington Post first broke.Lisanti told a fellow lawmaker that when he helped a candidate in Prince George’s County, he was knocking on doors in a “n— — district,” according to The Post.

The resolution stated: “This racist and hateful term has no place in anyone’s vocabulary, particularly an elected representative of the state of Maryland, serving on behalf of all of our constituents.”

Afterwards, Lisanti read a prepared statement to reporters outside the House chamber.

“You, my colleagues, are considering what is appropriate sanction for the use of a word. While ever so vile and hurtful, a word. Not an action, behavior or course of conduct,” Lisanti read from her statement. “Words matter. They can inflict pain and, in this case, this word represents the most deplorable, and for that, I accept your action.”

As a result of her poor choice of words, Lisanti said she hoped to hire a staff member to help her reach out to “diverse communities” in Harford County, according to The Sun.

Censure is the second-strongest punishment in the General Assembly, exceeded only by expulsion. It is a public expression of the House’s disapproval of a fellow lawmaker’s actions.

What this means for Lisanti is that Busch stripped her of her assignment to the House Economic Matters Committee, which reviews bills related to business regulation, and had previously removed her from posts as a subcommittee chairwoman and as a co-chairwoman of a joint committee on unemployment insurance. She currently has no committee assignments and can just attend floor sessions of the House of Delegates and vote on legislation.

“My hope is that with the censure, she will look herself in the mirror and realize she must resign,” said Barnes, a Prince George’s County Democrat, in an interview with The Baltimore Sun. “She cannot be effective at all. She has no responsibilities and no committee and folks are continuing to call for her resignation.”