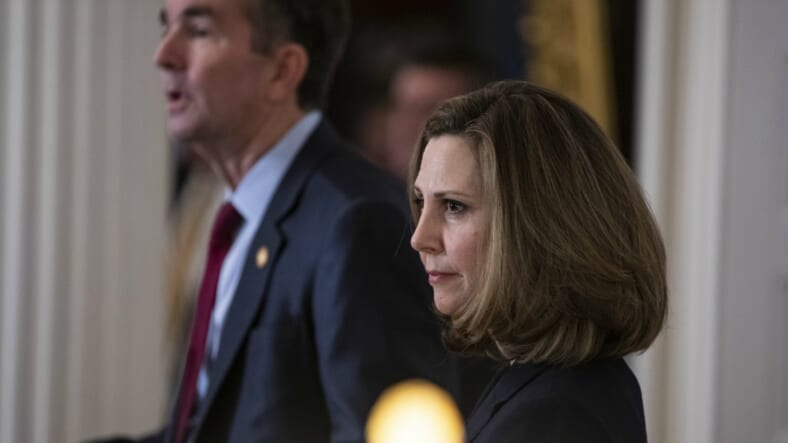 Pam Northam, wife of Virginia Governor Ralph Northam, listens as he speaks with reporters at a press conference at the Governor's mansion on February 2, 2019 in Richmond, Virginia. (Photo by Alex Edelman/Getty Images)

As if the governor’s mansion in Virginia hasn’t seen enough controversy in the past month, now a new one surfaces that isn’t exactly helping Gov. Ralph Northam with damage control.

First Lady, Pam Northam, is under criticism after she reportedly asked school children visiting the Governor’s mansion to imagine they were slaves as she handed them pieces of cotton, The Washington Post reports.

This latest gaffe comes on the heels of Northam’s husband’s own battles against racist claims when his 1984 East Virginia Medical School yearbook surfaced showing he was possibly one of two people dressed in blackface and KKK garb.

While Northam has resisted calls for his resignation, this newest incident is not sitting well with many.

Leah Dozier Walker, a parent and an employee at Virginia’s Department of Education said her daughter felt “uncomfortable” during the exchange with the First Lady who asked her child and others “if they could imagine what it must have been like to pick cotton all day”.

Walker took her concerns up with lawmakers and in a letter to Gov. Ralph Northam’s office she outlined Mrs. Northam’s insensitive exchange inside a historic kitchen on the property.

Walker’s daughter said she did not take the cotton but her friend did, according to the Post.

“I cannot for the life of me understand why the first lady would single out the African American pages for this—or—why she would ask them such an insensitive question,” Walker wrote, referring to students who had served as pages during the state Senate session.

“As First Lady, I have worked over the course of the last year to begin telling the full story of the Executive Mansion, which has mainly centered on Virginia’s governors. The Historic Kitchen should be a feature of Executive Mansion tours, and I believe it does a disservice to Virginians to omit the stories of the enslaved people who lived and worked there–that’s why I have been engaged in an effort to thoughtfully and honestly share this important story since I arrived in Richmond.

However, Walker who heads the state education department’s Office of Equity and Community Engagement responded in a letter to lawmakers and the governor’s office in disagreement.

“The Governor and Mrs. Northam have asked the residents of the Commonwealth to forgive them for their racially insensitive past actions,” she said. “But the actions of Mrs. Northam, just last week, do not lead me to believe that this Governor’s office has taken seriously the harm and hurt they have caused African Americans in Virginia or that they are deserving of our forgiveness.”

Northam’s office said the First Lady didn’t single out African American children, but rather handed the children the cotton as a group. Still the incident brings further unwanted scrutiny to Northam as he tries to move on from the blasts he has taken since the blackface controversy began.

Sen. William M. Stanley Jr. said his daughter was among the group that was with Northam and said the cotton was handed to all of the children. “The first lady’s intent was to show the horrors of slavery and to make sure everyone felt the pain they felt in some small measure,” he said.