Rapper Young Dolph says thieves made off with almost $500K in jewelry, cash from his SUV 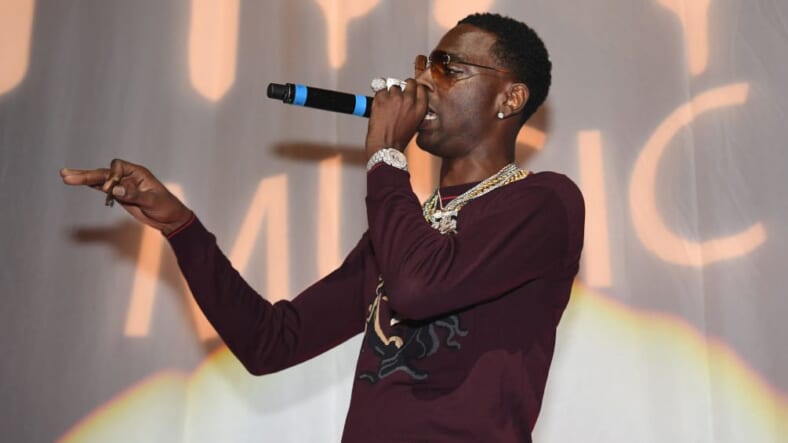 Rapper Young Dolph performs onstage at night four of the Late Night Concert during the 2017 BET Experience at The Novo by Microsoft on June 25, 2017 in Los Angeles, California. (Photo by Paras Griffin/Getty Images for BET)

Rapper Young Dolph had almost $500,000 in jewelry and cash taken from his car while he had lunch at a Cracker Barrel Wednesday outside of Atlanta, according to police.

The rapper, whose given name is Adolph Thornton Jr., was at a restaurant in Fairburn, Ga., eating with another man when employees told him someone had broken into his camouflage Mercedes-Benz SUV in the parking lot, WSB reported.

Police told the news organization that they found some oddities with the alleged crime.

In surveillance video shot from the QuickTrip convenience store next door to the Cracker Barrel, police observed Young Dolph park the SUV and get out, after which they observed the taillights flash on and off, and two or three minutes later, flash on and off two more times.

“That’s interesting to us in terms of what was happening with the vehicle,” Assistant Police Chief Anthony Bazydlo told WSB. “Was it being locked? Unintentionally unlocked? We don’t know.”

“The officer’s report indicates it appeared the suspect made entry into the passenger side of the vehicle,” Bazydlo said.

“It was unusual in a number of ways,” Bazydlo told the news organization of the alleged crime.  “Number one, we see the suspects in the video. They come to this vehicle three separate times.”

Young Dolph did not respond to WSB‘s request for comment.

In an Instagram post on Thursday, Young Dolph made comments about Black History Month as he sports a jewel-encrusted ring and chain.