The HUD secretary has been in the midst of controversy since he was confirmed for the job. But now he says he's had enough and talks about what he'll do next 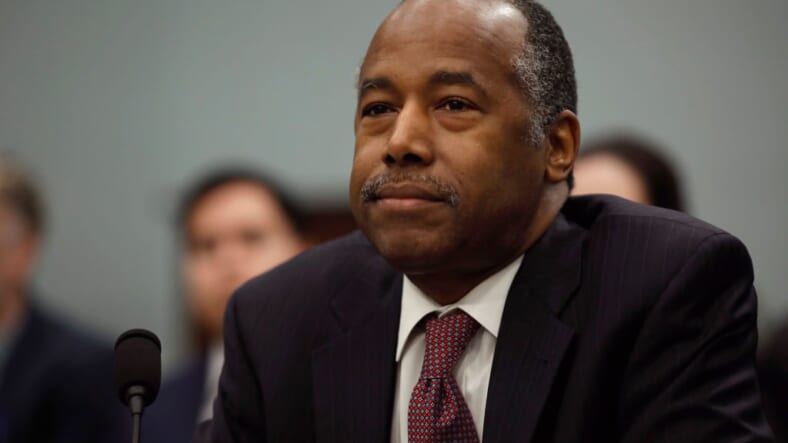 WASHINGTON, DC - MARCH 20: Secretary of Housing and Urban Development Ben Carson arrives to testify before the Subcommittee on Transportation, Housing and Urban Development, and Related Agencies on Capitol Hill March 20, 2018 in Washington, DC. Secretary Carson has drawn fire from lawmakers for purchasing furniture for his office suite despite agency cutbacks. (Photo by Aaron P. Bernstein/Getty Images)

Monday, Carson made the announcement during an interview with Newsmax TV’s John Gizzi stating his desire to return to the private sector.

“I will certainly finish out this term,” explained the Republican was appointed to the post following his own failed presidential bid in 2016.

The 67-year-old was also very candid when asked about former Trump lawyer Michael Cohen telling Congress that Trump is a racist.

“I think Cohen is trying to ingratiate himself to the people who hate Trump,” he opined. “I’ve never seen anything that even remotely would remind me of racists, and believe me, I recognize a racist when I see them.”

Carson has received harsh criticism from Democrats for downsizing the department’s efforts to fight housing discrimination after postponing the implementation of the Affirmatively Furthering Fair Housing Rule which was approved during the Obama years.

“I don’t have any problem with affirmative action or integration — I have no problem with that at all,” Carson said during his Senate confirmation hearing in 2017. “But I do have a problem with people on high dictating it when they have no idea what’s going on in an area.”

The former neurosurgeon also attracted early criticism in the role after emails showed he and his wife ordered a $31,000 dining room set to redecorate his office.

Federal law prohibits the head of a department spending more than $5,000 on refurnishing an office without getting advance approval from Congress. While Carson and HUD officials offered contradictory explanations for the order, the purchase was ultimately canceled after the price tag became public .