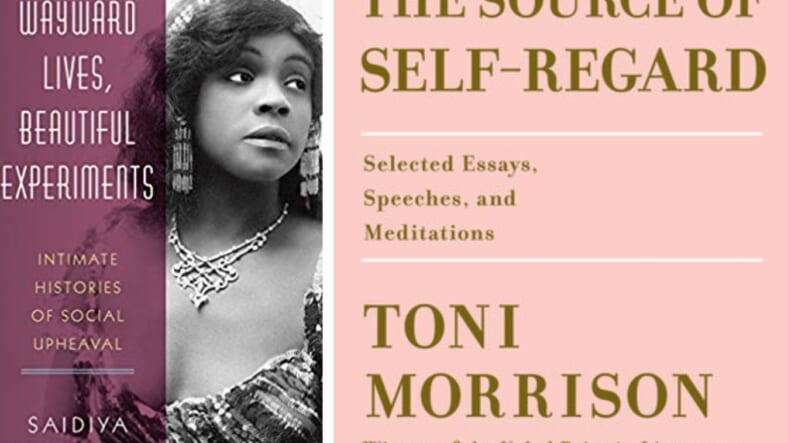 It goes without saying that the national mood is ripe for women—and particularly Black women—to speak up and speak out about what they think, feel, and know. So in that spirit, and in honor of Women’s History Month, here are 20 new and upcoming releases from Black women authors that you should be reading this year. Some of the authors are venerable vets you know, others are notable newbies you’re invited to discover. All of them will allow you to slow things down to escape for a little bit of literary luxury, and give you something to talk about when you come up for air.  Happy reading!

1.Thick: And Other Essays by Tressie McMillan Cottom (The New Press)

Through smart, provocative essays, Cottom, an assistant professor of sociology at Virginia Commonwealth University, tells rivetingly powerful musings that are aimed at inspiring discussion, and even debate, as they speak truth to power.

2. The Truths We Hold: An American Journey by Kamala Harris (Penguin Press)

The senator from California speaks about the core truths that she’s come to uphold, based on her upbringing by immigrants and her childhood in Oakland. By drawing on the wisdom and insight gleaned from her career and the work of those who inspired her, Harris presents a master class in problem solving, crisis management, and leadership during challenging times.

3. The Warrior Code: 11 Principles to Unleash the Badass Inside of You by Tee Marie Hanible with Denene Millner (St. Martin’s Press)

In Warrior Code, entrepreneur, philanthropist, reality star, and gunnery sergeant Hanible shares how she learned and trained to stand strong in the face of adversity, and live to emerge triumphant on the other side. As part of one of the first female classes of recruits to complete the Marine Corps Crucible and the Marine Combat Training, and as the only woman to deploy with her unit to Iraq in 2003, provides insight into how she became a warrior—and how the reader can do it too.

4. The Hundred Wells of Salaga: A Novel by Ayesha Harruna Attah

Attah, an award-winning author and scholar, provides a 19th century bird’s-eye view of her homeland of Ghana, experienced through the intersection of the lives of protagonists Aminah and Wurche as they come of age at the height of the slave trade.

Nobel Prize-winner Morrison treats us here to a new nonfiction collection of her work in various forms, sharing insight on society, culture, and art, from her uniquely rich perspective. The collection is divided into three parts: and introduction in the form of a powerful prayer for the dead of 9/11; a meditation on Martin Luther King Jr.; and a searing eulogy for James Baldwin.

6. The World According to Fannie Davis: My Mother’s Life in the Detroit Numbers by Bridgett M. Davis (Little, Brown and Company)

A straight, no chaser view into the life of a Detroit numbers runner, as told in loving tribute by her devoted daughter. Writer, director, and journalism professor Davis unapologetically tells the story of how an underdog took on a corrupt system—and won.

7. The Path Made Clear: Discovering Your Life’s Purpose by Oprah Winfrey (Flatiron Books)

The book club queen herself comes forth with a 10-chapter guidepost that, through personal stories and key lessons from herself and other notables, provides the reader with teachable moments shared to help the reader navigate through the maze of a purpose-driven life. Out March 26th

8. God’s Will and Other Lies: Stories by Penny Mickelbury (BLF Press LLC)

Here, Mickelbury, mystery writer of eleven novels turns over a new leaf with this collection of fictional stories that places an often overlooked segment of society under a microscope: aging and elderly Black women offering their perspective on life, love, and endurance. Out March 26th

The stories in Makumbi’s collection, centered around the lives of Ugandans in Britain, work to measure how far a person must travel to find home elsewhere. As the expatriate characters in this tome seek to find their place on a new continent, they find themselves, literally and figuratively, drifting further and further away from their homeland. Out April 30th

In this sixth children’s book by author Winston, Jada Sly is a 10-year-old precocious artist and spy-in training, on a mission to find her mom. Her search takes her to New York City to search for clues leading to her missing mother whom she’s been told died in a plane crash—but Jada’s instincts tell her differently. Out May 14th

11. Notes from the Field by Anna Deavere Smith (Anchor)

The Tony- and Pulitzer-nominated playwright, author and activist calls out the tragedy of the school-to-prison pipeline that plagues the United States. Originally performed as a one-person play, portrays a bevy of real-life figures who have witnessed, experienced, and fought the system that pushes students of color out of the classroom and into prisons. Now a full-length HBO feature. Out May 21st

12.  Children of Virtue and Vengeance (Legacy of Orisha, Book 2) by Tomi Adeyemi (Henry Holt and Co.)

This young adult fantasy novel follows Children of Blood and Bone, the first in a promising debut trilogy written by the Nigerian-American author who has been compared to J.K. Rowling. It follows characters Zélie and Amari on their quest to bring magic back to the village of Orïsha. Out Dec 3

Through this beautifully written and closely researched text, author Hartman explores the non-traditional relationships—from common-law to serial partners—engaged in by Black couples in early twentieth century New York and Philadelphia.

Award-winning author Murray, in her newest novel in the Seven Deadly Sins series, weaves a tale that tackles the age-old struggle of the protagonist, Zuri, striving for what she wants as opposed to what she needs. This page-turner will keep the reader riveted, right up to the book’s devious twist.  Out June 18th

15. The Safe House (The Black Market) by Kiki Swinson (Dafina)

National bestselling author Swinson is back, with a new novel packed with suspense, intrigue, and brutally memorable characters, all portrayed through the lens of gritty Southern life. You’ll keep flipping pages to see how the story’s heroine faces a succession of harrowing adventures as she fights desperately to keep herself, and those she loves, alive. Out June 25th

From New York Times bestselling author Mary B. Morrison comes the seductive, no-holds-barred novel of a dazzling power couple who play their scandalous love-hate affair one game too far . . . Out July 30th

Look for this third installment of three romance novels in the Wedding Date series (following The Wedding Date [Jan. 2018] and The Proposal [Oct 2018] to be as exhilarating as the prior two. The New York Times bestselling Bay Area author introduces us to Maddie and Theo—two initial “frenemies” who share a best friend, planning duties for their friend’s wedding, and ultimately, a bed. Out July 16th

18. Speaking of Summer: A Novel by Kalisha Buckhanon (Counterpoint)

A new novel from the author of Upstate, one of five books selected by the National Book Foundation for the inaugural Literature for Justice Program. It’s a literary thriller about a woman’s desperate search for her missing twin sister, set in Harlem. Out July 30th

This sequel to Billingsley’s heralded #1 national best-selling debut My Brother’s Keeper tells the stunning story of a wife and mother who embarks on a daring rescue mission—to rescue herself. The author adds this novel to her other bestselling books, including Let the Church Say Amen (the basis for a 2013 feature film), I Know I’ve Been Changed, and Say Amen, Again. Out August 27th

20. Breathe: A Letter to My Sons by Imani Perry (Beacon Press)

Perry, the Hughes-Rogers Professor of African American Studies at Princeton University, explores the highs and lows of coming of age as a Black person in contemporary America, and what it means to rear children in a persistently unjust world. Out September 17th