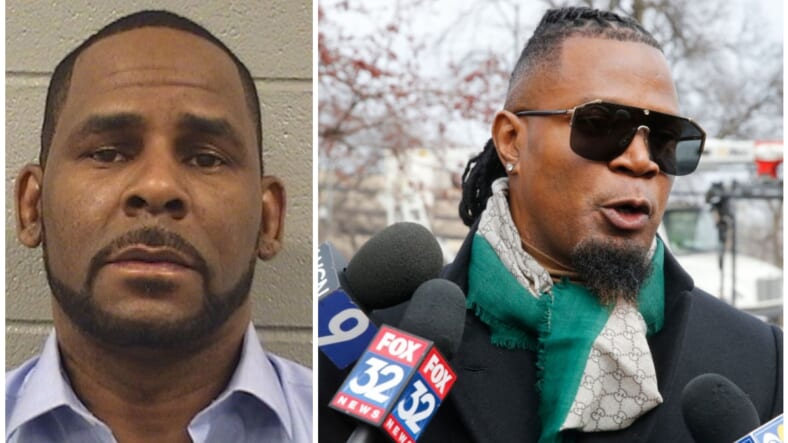 Still reeling from the explosive interview with Gayle King last week in which R. Kelly stood up, beating on his chest emphatically and cried while he shouted “Y’all just don’t wanna believe the truth,” his publicist, Darrell Johnson, told a Houston news station that the R&B singer is depressed and emotional following his sexual abuse charges.

Johnson told KPRC that on Saturday morning, Kelly was released from the Cook County Jail after his friends from “all across Chicago” bailed him out after paying $161,000 in back child support. When pressed for information on who specifically bailed out the 52-year-old singer, Johnson said he didn’t know.

Kelly is due back in court this upcoming Wednesday on his child support case. He also faces 10 counts of aggravated criminal sexual abuse in a case the Cook County Prosecutor brought against him on behalf of four women, three of whom were underage when Kelly abused them. He spent a weekend last month in Cook County jail on those allegations before he was released on a $100,000 bail, reportedly posted by Valencia P. Love, who is described as Kelly’s “friend,” according to the Chicago Sun Times.

According to Johnson, Kelly hopes for a speedy trial to get this all behind him. Kelly was reportedly surprised when he was jailed last week for the outstanding child support, causing him to become depressed, Johnson said, before adding, in the KPRC interview: “he should have been.”

Johnson told the news station that Kelly isn’t a “deadbeat dad,” he was simply struggling because he didn’t have the money to pay the back child support. Yet, he apparently has enough money to live in Trump Towers.

Kelly maintains that he is innocent of the child sexual abuse charges and that the women’s families are out to get paid. Johnson said the recent interview with Gayle King showed the singer is passionate about setting the record straight and added that Kels is “an emotional guy.”

Johnson said his advice to Kelly now that he has been released from jail is to stay home and to stay out of the limelight.