3 ugly truths we learned from the College Cheating Scandal 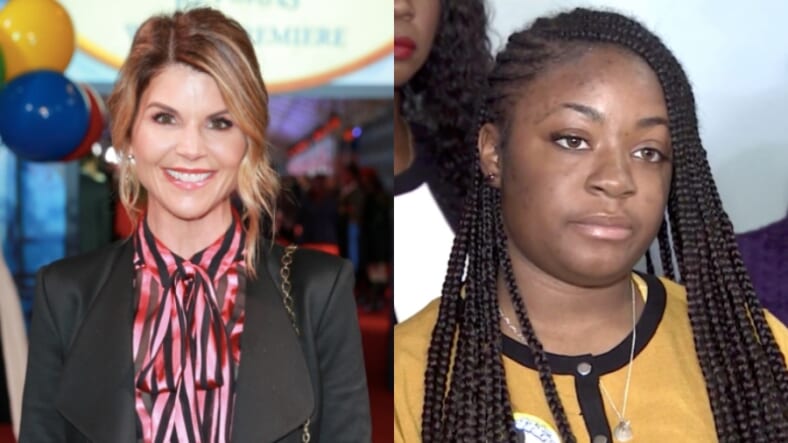 theGrio’s Natasha S. Alford tells the story of two Americas: one which punishes Black parents and students for challenging educational inequality and another where wealthy white parents game the system regularly for selfish gain.

Watch our Grio Editor’s Note above and read the video transcript below:

Rich parents cheated to get their undeserving kids into college.

Are we really all surprised?

The FBI recently announced that dozens of parents, coaches and leaders scammed the admissions system —paying off school staff and about their kids achievements to get them into top schools. Some even had other kids take standardized tests for their children.

A lot of us aren’t surprised by the news, but the cheating scandal does reveal three ugly truths about the way education works in America.

Remember Kamilah Campbell, the Florida student who was accused of cheating on her SAT’S after improving her grades on the second try? Campbell was forced to drop her case against the college board, which said they had the authority to question her scores.

Isn’t it crazy, a girl who actually studied to improve was flagged but kids who took tests in far away locations for fake reasons — like a family wedding — went by unnoticed? It’s almost like being Black and intelligent is hard to believe, when in reality, Black children of every class + educational background are capable and have always been.

Ohio mom, Kelley Williams-Bolar, went to jail in 2011 for saying her children lived in the district of a highly ranked school —where her father actually lived. Bolar says she wanted her kids in a new school after her home got broken into and to give them opportunity. The school hired a private investigator to track Bolar and asked her to pay $30,000 in back tuition.

While Bolar was singled out with 10 days in jail, three years of probation —basically labeled a criminal— the daughter of actress Lori Loughlin, who allegedly paid to get her into USC, is on Youtube posting videos stating, “I do want the experience of game days and partying…I don’t really care about school…as you guys all know.”

READ MORE: ONLY IN AMERICA: BREAKING THE LAW TO GET KIDS IN A BETTER SCHOOL

I was 17 years old when I applied to Harvard University from a public city high school.  I remember a well-meaning teacher saying they didn’t want to discourage me, but I didn’t exactly have the highest SAT scores for their applicant pool. It turns out that many young students are told this by guidance counsellors.

Even though it hurt my feelings, I applied anyways. I had the support of my community, my math teacher who secretly wrote a letter of recommendation on my behalf, and a alum from the class of 1936, who told me he believed in me.

Once I arrived on campus in the fall of 2004, I still felt I had to prove I deserved to be there, and struggled with imposter syndrome during my first year —until I came to see over time that i was just as capable as kids who’d gone to “better” schools.

There are a lot of first and second generation college kids who feel this way, like they don’t really belong or will be questioned, because the help of affirmative action, offset years of disadvantages from slavery, segregation, genocide, and institutional discrimination.

READ MORE: COLLEGE CHEATING SCANDAL: AUNT BECKY’S KIDS WILL BE FINE, BUT WHAT ABOUT THE DESERVING BLACK KIDS WHO NEVER GET A SHOT?

This college cheating scandal shows there are people we assume deserve to be where they’re at more than us because of privilege, titles or fancy degrees but it doesn’t mean they earned it or that you don’t have what it takes.

Even with all the illegal activity, there are still plenty of legal ways people get away with upholding educational inequality.

And if we say America is really about opportunity, it’s time to make sure parents and kids who need it most, don’t have to go to desperate measures to get basic resources that the wealthiest people take for granted.

Grio fam, what will it take to make America’s education system more fair? Hit us in the comments.

Natasha S. Alford is Deputy Editor of theGrio and a former school teacher.  Follow at @NatashaSAlford on Instagram and Twitter for more news, political and trending topic updates.