Kamilah Campbell says her higher score was the result of hard work and better preparation. 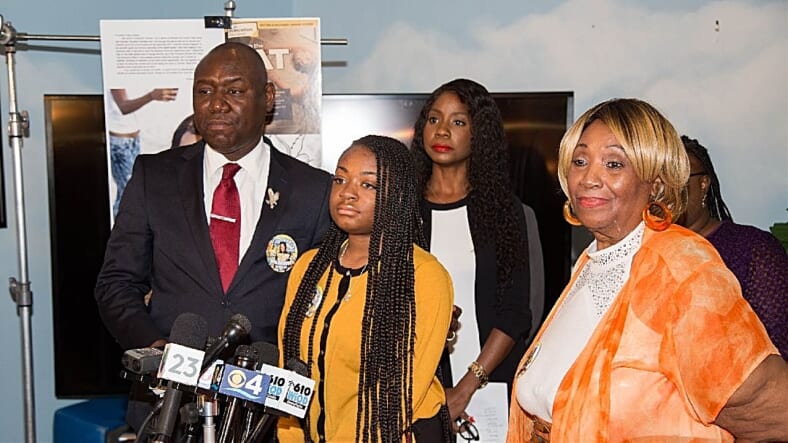 Attorney Ben Crump speaks during a news conference as he defends 18-year old high school student, Kamilah Campbell, who is being accused of cheating on the SATs. She says studying hard and better preparation are the reasons behind her improved SAT scores. (Photo courtesy of Ben Crump

Nationally recognized civil rights and personal injury attorney Benjamin Crump has been  retained by a Black Miami Gardens teenager whose SAT scores were flagged by the Educational Testing Service (ETS) because they were deemed “too improved” to have been legitimately attained.

Crump has issued a demand letter on behalf of 18-year old student, Kamilah Campbell to ETS, calling on the company to release Campbell’s SAT score within two weeks so that she can be considered for admission to Florida State University.

Campbell is an honors student with a 3.1 GPA at Michael M. Krop Senior High School, and like thousands of other students across the country, she took the SAT on Oct. 6. 2018.

Two weeks later, she received a letter from ETS noting her that her score had been flagged for further review. A representative from ETS’s Testing Integrity division allegedly told Campbell that her test results were flagged because her score was 1,230, which is more than 300 points higher than her score was when she took the test for the first time in March 2018.

In the demand letter, Crump is requesting that ETS release Campbell’s test scores within the next two weeks to give colleges and scholarship committees time to evaluate her applications. Failure to do so, Crump adds, will prompt him to explore “every possible legal remedy available to give Campbell the justice she deserves, including but not limited to, pursuing litigation on the basis of the violation of her civil rights.”

“It is not for ETS, a private corporation, to define the limits of human achievement and betterment,” Crump said. “In concluding that the only way Kamilah could have improved her score so substantially was by cheating, ETS defamed Kamilah’s character and replaced what should have been appropriate and motivating personal pride with shame and confusion.”

According to Kamilah Campbell, the higher score was the result of hard work and preparation. She explained that she took the SAT for the first time on March 10 with no preparation. Between then and October, she said she practiced diligently, working with her teachers, receiving tutoring, and regularly accessing the preparatory resources of Khan Academy, according to Crump.

Despite her explanation, ETS sent a follow-up letter stating that “based on a preliminary review, there appears to be substantial evidence that your scores on the October 6, 2018 SAT are invalid” as a result of “substantial agreement between your answers on one or more scores sections of the test and those of other test-takers,” and that her score was flagged because “such a marked improvement of her score indicated to ETS that she likely had ‘prior knowledge’ of the test,” Crump said.