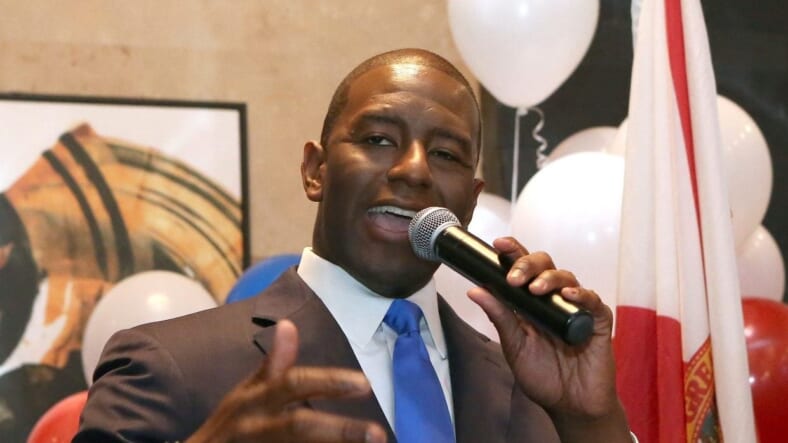 Andrew Gillum addresses his supporters after winning the Democrat primary for governor on Tuesday, August 28, 2018, in Tallahassee, Fla.(AP Photo/Steve Cannon)

Former Tallahassee Democratic Mayor Andrew Gillum may not be running for the Presidency after his hard-fought campaign for governor, but he’s rolling up his sleeves to help ensure that all votes in the Sunshine State are counted, Politico reported.

On Wednesday, Gillum, formally launched a voter registration group called Bring it Home Florida, in Miami Gardens in an effort to mobilize voters and keep a watchful eye on votes in a high-stakes election to unseat President Donald Trump.

Florida is the largest swing state, and nominees will be gunning for the 29 electoral votes that could make or break their chances at a win and Gillum is leading the way to help them along the way.

“When Obama was on the ballot in 2008, Democrats enjoyed a registration advantage of almost 800,000. When I showed up on the ballot, that advantage had shrunk to less than 300,000. And it makes a difference if you have more marbles on the table and more voters you can choose from and have the opportunity to produce.”

He added: “Given the migration patterns in our state, and given the challenges we have around producing an electorate that’s favorable to Democrats to get out and vote — we’ve got to put more people in the game.”

While Gillum told the New York Times on Wednesday that he doesn’t plan to run for the Presidency, word is that Joe Biden is gearing up to possibly team up with Stacey Abrams for a 2020 Democratic ticket.

Biden’s aides are reportedly co-signing Abrams for the VP position for the 2020 presidential bid. Given that Abrams’ tough as nails run for Georgia governor earned her national praise, Biden’s aides believe the pairing would show the 76-year-old is not “just another old white guy.”