Your Folks Have Jokes: Best Black Twitter reactions to Jussie Smollett getting all 16 charges dropped 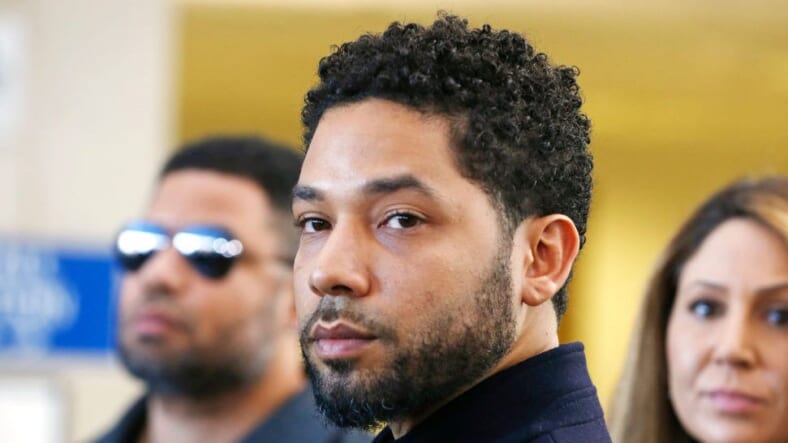 Concluding what has to be the most ridiculous and frustrating celebrity crime “saga” this side of O.J. Simpson, Empire star Jussie Smollett was suddenly and unexpectedly cleared of all charges related to the Jan. 22 alleged hate crime attack that the Chicago Police Department claimed was completely fabricated.

Now that ‘Empire’ actor Jussie Smollett has been cleared of all 16 charges against him alleging that he staged his own attack, will his life ever be able to return to normal?

The newest updates to this whirlwind story can be found here: https://t.co/8WwgJTD1Rq pic.twitter.com/EKObbOGWkE

The whole thing threw everyone’s Tuesday in a tailspin of skepticism, inscrutability and mistrust of the Chicago Police Department. There was also a press conference from a pissed-off lame-duck mayor. It gave Twitter something to do on a Tuesday:

First, there was the elation that the dropped charges seem to vindicate Smollett:

*All charges against Jussie Smollett have been dropped!*

The homophobes and racists: pic.twitter.com/qlJYKQFkEF

There were also the folks who flipped Smollett’s own words when he likened himself to a “gay Tupac.”

And of course, there were folks patting themselves on the back for accomplishing the impossible: shutting the f— up until the whole thing played out.

Whew, shoutout to those of us who were smart enough to sit there and eat our food throughout all of the #JussieSmollett court drama. pic.twitter.com/LASwFnCPiJ

The Chicago Police Department was perhaps the biggest (deserving) target of Black Twitter ire. Everyone wondering how the manifold charges against Smollett were just dropped out of nowhere called shenaniganry on the department, which we haven’t really trusted as a collective since the LaQuan McDonald coverup. If you don’t want to read a lot of “I-told-you-sos,” just mute any mention of CPD now.

I want to revisit how CPD–an org w/ decades long history of brutal violence against Black people–tried to blame Jussie Smollett for racial tensions in Chicago & how the conservative mvmt went into overdrive trying to downplay the prevalence of hate crimes but I’m exhausted rn.

I hope the Chicago PD keeps that same energy they used in the first press conference as they explain why charges have been dropped against Jussie Smollett.

It was disheartening to see so many people jump at trusting the Chicago Police Department and its process over Jussie Smollett. The details were messy on both sides, but the CPD has been a corrupted force for a long time. https://t.co/4puS41WJlP

Is someone going to be filing charges against the Chicago Police Department for how poorly they managed every aspect of the #JussieSmollett “investigation”?

Cook County State’s Attorney Kim Foxx is the other primary target of skepticism in the whole affair as far as the CPD is concerned. Smollett’s family asked Foxx to intervene shortly following the alleged attack. Since her office dropped the charges against Smollett, it creates a division between the CPD and the state’s attorney office that I doubt we’ve heard the last of.

The State’s attorney’s office is saying the decision to drop the charges against #JussieSmollett did not come from Kim Foxx as she recused herself. No one that’s close to the case that I’ve talked to outside of #Smollett’s legal team believes that.

Chicago’s outgoing mayor Rahm Emanuel had quite a few words for the whole thing, calling the whole issue a “whitewash of justice” and getting louder than we’ve seen him get, perhaps because he has nothing to lose now. But no…Black Twitter is not having it from Emanuel.

Just a note: Mayor Rahm Emanuel has literally never said this much abt a single documented case of police brutality during his reign of terror. Chicago has paid hundreds of millions of dollars to settle cases of police abuse & murder while this coward hides behind his desk. https://t.co/lyJacgMGpZ

Re: #JussieSmollett: “This is without a doubt a whitewash of justice,” Chicago Mayor Rahm Emanuel said at a news conference Tuesday afternoon. “There is no accountablity. It is wrong, full stop.”

Says the mayor who helped CPD cover up its murder of Laquan McDonald.

The whole issue seems to bring about more questions than answers:

So the attorney for @jussiesmollett just said the two brothers admitted attacking him. So they are standing on the fact that the two Nigerian guys attacked him. So will they be charged?

Y’know…contrary to some beliefs…it’s perfectly okay to be highly skeptical of both Jussie and the CPD at the same time.

At the end of the day, every last one of us is left with one question that will probably never get answered at this juncture: