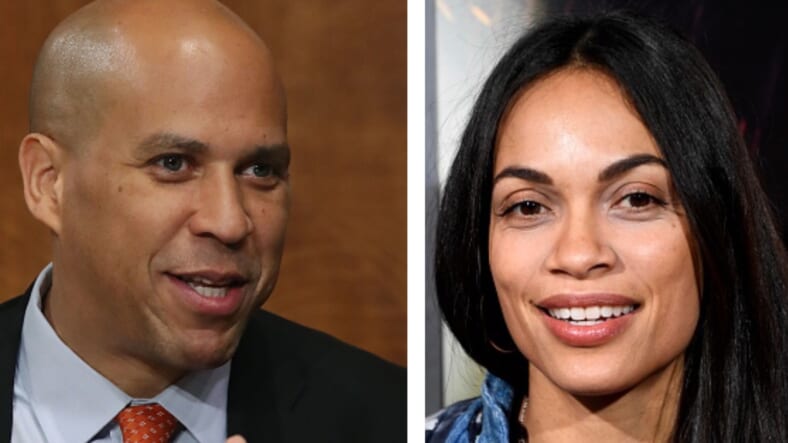 Former Maryland gubernatorial candidate Ben Jealous according to the Baltimore Sun, is the reason that Senator Cory Booker and actress Rosario Dawson are an item. Booker gave a shoutout to Jealous this week with for playing cupid with the two.

Booker who announced his bid for the 2020 presidential campaign in February held a CNN town hall on Wednesday, in Orangeburg, S.C. During this chat, he spoke about his Dawson stating, “I have an incredible girlfriend,” Booker said. “She is just simply amazing and I am hopeful, as is my mother.”

Jealous, founder of Baltimore-based investment firm 20x, is looked at as the couple’s matchmaker because they first met at his fundraiser where Booker said Dawson, “didn’t give me the time of day.”

They then came in contact a second time and though the New Jersey Senator was unsure about approaching her he decided to take advantage of the opportunity.

“I had one of those really awkward experiences,” he said of the exchange. “I’m a United States senator and I had to get up the courage to walk up to her and ask for her for her phone number.”

Although he was nervous, his charm worked and he got her phone number. “I’m very lucky to be in a relationship with someone who is just so incredibly special but more importantly has taught me so much in very short amount of time,” he said.

TheGrio reported in early March that Dawson confirmed the two were an item when questioned my TMZ. “So far so wonderful. He’s a wonderful human being. It’s good to spend some time together when we can. We’re very busy.”

“I am just grateful to be with someone that I respect and love and admire so much, who is so brilliant and kind and caring and loving,” she said.