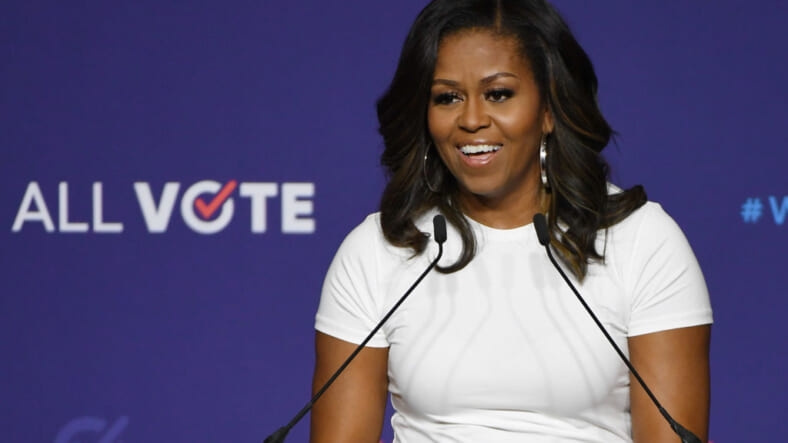 Former first lady Michelle Obama speaks during a rally for When We All Vote’s National Week of Action at Chaparral High School on September 23, 2018 in Las Vegas, Nevada. Obama is the founder and a co-chairwoman of the organization that aims to help people register and vote. (Photo by Ethan Miller/Getty Images)

Michelle Obama’s having a banner year, and her book “Becoming” is on track to become the best-selling memoir ever, her publisher Penguin Random House announced Tuesday, according to the Wall Street Journal.

Since its November release, the book has become a sensation. Mrs. Obama has been selling out stadiums as she talks about her life experiences and has sold nearly 10 million copies for the publishing company in print, digital, and audiobook copies globally.

“We believe this could be the most successful memoir in history,” said Bertelsmann Chief Executive Thomas Rabe.

In the book, Obama talks about life after before and after her time in The White House.

While the world knows Obama for her zeal and advocacy for public health, higher education, and women and girls empowerment initiatives during her tenure at The White House, her book shows the intimate and vulnerable sides of Obama.

Sharing with the world her truths, her triumphs, and even trials of growing up with humble beginnings in the South Shore neighborhood of Chicago; her life as a doe-eyed, nervous college student at Princeton University and later, Harvard Law School; to falling in love and lust with her husband, President Barack Obama; the painful experience of suffering a miscarriage and conceiving her daughters through IVF treatments; going to marriage counseling; to being mother-and-wife-in-chief and more, the highly anticipated book is an ode to the importance of finding your voice, standing firm in your beliefs and being proud of who you are and where you come from.

And soon, Barack Obama will release his much-anticipated presidential memoir this year. But no date has been set by Penguin Random House just yet.