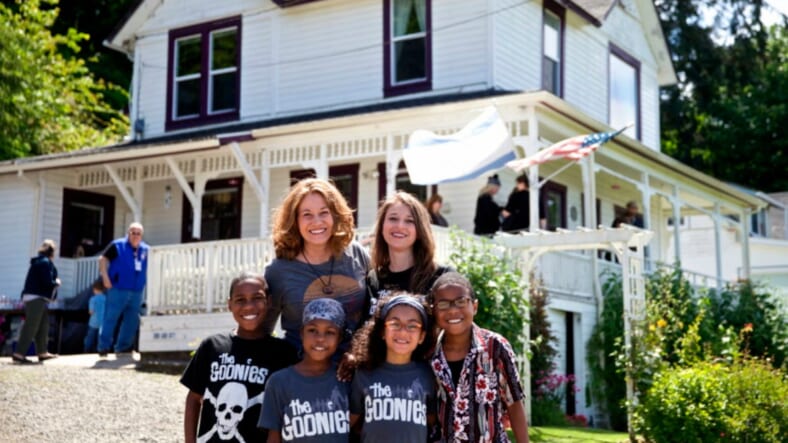 This June, 2014, file photo shows some of the Hart family at the annual celebration of "The Goonies" movie in Astoria, Ore. Authorities in Northern California will hold a coroner's inquest to determine the manner of death for eight members of the family, whose SUV plunged off a coastal cliff last year. (Thomas Boyd/The Oregonian via AP, File)
SAN FRANCISCO (AP) — Jen and Sarah Hart and three of their adopted children died of broken necks after their SUV plunged off a Northern California cliff, a forensic pathologist testified during a coroner’s inquest Wednesday to help authorities classify the deaths.A jury in Willits will decide whether the March 2018 deaths of the two women and their six children were accidental or a murder-suicide.READ MORE: Investigation on crash that claimed the lives of Hart siblings to conclude

The crash happened just days after authorities in Washington state opened an investigation following allegations the children, ages 12 to 19, were being neglected.

Portland police Sgt. Bret Barnum, left, and Devonte Hart, 12, hug at a rally in Portland, Ore., where people had gathered in support of the protests in Ferguson, Mo.  Hart is one of the three other children still missing after a vehicle driven by Jennifer Hart went off a cliff. (Johnny Huu Nguyen via AP, File)

The bodies of the women were inside the SUV when it was discovered, but one of them fell out as the vehicle was being towed up the cliff off the coast of Mendocino County, Sheriff Deputy Robert Julian said during testimony livestreamed online.

Julian testified he was able to identify Sarah Hart through a Minnesota driver’s license found near the car.

“I wasn’t able to identify Jennifer Hart due to her fall,” Julian said. She was later identified by authorities.

Forensic pathologist Greg Pizarro testified that Jennifer Hart was drunk when she drove her large family off the cliff, saying an autopsy found she had a blood alcohol level of 0.102. California drivers are considered drunk with a level of 0.08 or higher. She was also the only one wearing a seatbelt, he said.

Sarah Hart and the children had large amounts of diphenhydramine in their systems, a drug that can cause drowsiness, authorities have said.

The bodies of siblings Markis, Jeremiah and Abigail were found the same day near the car. Weeks later, the body of Ciera Hart was pulled from the Pacific Ocean.

Pizarro said Ciera’s body was too decomposed and he couldn’t determine a cause of death.

“You can only assume her manner of death was similar to all the other children,” Pizarro said.

Human remains found in a shoe were matched to Hannah Hart through DNA testing. The remains of 15-year-old Devonte Hart have not been found.

A neighbor of the Harts in Woodland, Washington, had filed a complaint with the state, saying the children were apparently being deprived of food as punishment. No one answered when social workers checking on the report went to the family’s home near Portland, Oregon, on March 23.

Three days later, their SUV was found partially submerged in the ocean, below a rugged cliff more than 160 miles (250 kilometers) north of San Francisco.

Sarah Hart pleaded guilty in 2011 to a domestic assault charge in Minnesota over what she said was a spanking given to one of her children. Oregon child welfare officials also investigated the couple in 2013, but closed the case without taking any action.