Police are unclear what caused the accident. 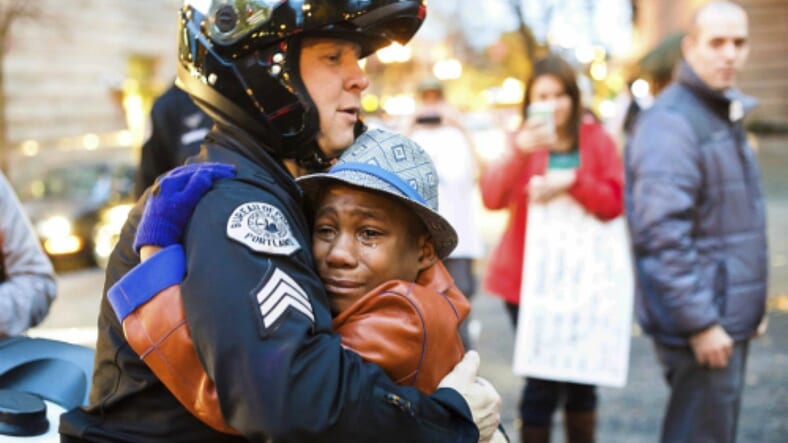 A young Black boy, who became the poster child for peace after a photo of him hugging a police officer during the 2014 Ferguson protests went viral, has died.

Devonte Hart, along with his entire family, were driving in their SUV until it veered off a California cliff on Wednesday, reports Fox News.

Police discovered the SUV belonging to Jennifer and Sarah Hart at the bottom of a northern California cliff and found the two women dead along with three of their adopted children. Three additional adopted children are missing, leaving the police unsure if they are also among the dead.

“We have every indication to believe that all six children were in [in the SUV],” said Mendocino County Sheriff Tom Allman. “We know that an entire family vanished and perished during this tragedy.”

Allmon told reporters Hannah Hart, 16 and Devonte and Sierra Hart, 12 were inside the vehicle when it fell 100 feet off an ocean overlook and landed at the bottom of the cliff near the Pacific Ocean. The bodies of the other children Markis Hart, 19; Jeremiah Hart, 14; and Abigail Hart, 14 have not been recovered. Police are saying it is unclear what caused the accident as there are no skid marks.

The Hug Shared Around the World

Devonte Hart became an internet sensation when a photo of him holding a sign offering “Free Hugs” during a Ferguson protest after a grand jury’s decision not to indict Ferguson police Officer Darren Wilson went viral. Hart’s tearful face caught the attention of Portland police Sgt. Bret Barnum who approached the crying boy and gave him a much-needed hug. Barnum said he approached Devonte “not as a police officer but just a human being” when he saw him crying.

The moving moment was captured by the Oregonian newspaper and within hours of the photo being published, it went viral, leading the Oregonian to call it “the hug shared around the world.”

“The situation itself is something police officers do every day when they go out on the street and make citizen contacts,” Barnum said to CNN in 2014.

Some friends describe the family as loving, inspiring and keenly aware of social justice, but other say there were signs of problems. Neighbors report that child welfare services were called as recently as Friday over concerns about the children and whether they were being fed.

Bruce and Dana DeKalb, who live next to the Hart’s said the kids had come to their home several times asking for food. Clark County sheriff’s Sgt. Brent Waddell confirmed to The Associated Press, that Child welfare officials did make a recent visit to the residence.

Bruce also recounted a story saying that one of the girls rang his bell at 1:30 a.m. about three months ago, begging for help and saying she had been abused. She “was at our door in a blanket saying we need to protect her. She said they were abusing her,” said Bruce.

Court records also revealed that Sarah Hart pleaded guilty in 2011 to a domestic assault charge in Minnesota. After her plea, the Associated Press reports that a charge for malicious punishment of a child was reportedly dismissed.