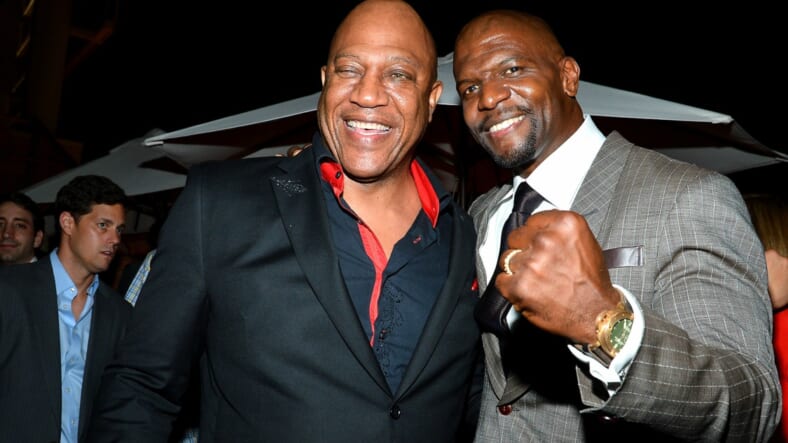 Actors Tommy ‘Tiny’ Lister and Terry Crews attend the after party for the Lionsgate Films’ ‘The Expendables 2’ premiere on August 15, 2012 in Hollywood. (Photo by Frazer Harrison/Getty Images)

Police in Chandler, Ariz., responded Friday to the home of actor Tommy “Tiny” Lister after a woman livestreamed an argument with him and video of him knocking the phone from her hand, TMZ reported.

Lister, who is best known for his character “Deebo” in the Friday movie series, was not arrested in the incident that wrapped up at his home. According to the IMDB website, Lister, 60, is married to Felicia Forbes, a missionary and minister from South Africa who he wed in 2003. Lister, however, told TMZ that he and his wife are separated and that the woman in the video is his girlfriend.

There were no arrests or charges filed in the incident that appeared to start in the car, TMZ reported.

In the livestream video, the couple argues in the car and Lister, who is 6’6″, tries to swipe the phone away from the woman. Once in the garage, Lister lunges at the woman, who shouts, “Don’t f—ing hit me!”

Lister told TMZ that he never hit the woman and that he was only trying to get the cell phone out of her hands.

Lister told the website that he was angry because the woman kept egging him on. He claimed that police viewed the video and advised him to get a restraining order against the woman.

The actor also told TMZ that he and the woman are breaking up and that she is his ex girlfriend.

Lister is a former professional wrestler and former basketball player who decided in the 1980s to pursue acting, according to IMDB.

He starred as “Deebo,” the neighborhood bully, in the 1995 movie Friday and the 2000 movie Next Friday. He often is cast as a bully because of his size and deep voice. But he has also had roles in The Dark Knight, The Players Club, Jackie Brown and The Fifth Element. He is currently set to reprise his popular role in the upcoming sequel Last Friday, according to IMDB.