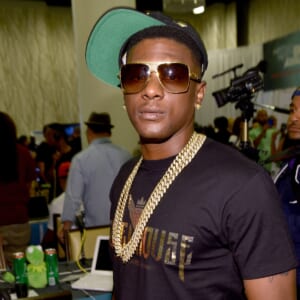 On Monday, it seems that Boosie Badazz was living up to his name when he was arrested in Georgia along with Antonio Allen for alleged felony drug and firearm possession, The Newnan Times-Herald reports.

‘Lil Boosie,’ whose real name is Torrence Hatch, caught heat after he was pulled over by cops for driving erratically in Newnan, and after a search of the vehicle, marijuana was discovered along with a loaded gun.

The rapper’s white Dodge Charger was swerving across the road, according to the deputy, Sgt. Jeff Bugg, and it nearly sideswiped a vehicle. The cop also reported smelling a strong weed aroma emanating from Boosie’s car.

Now they’ve caught a case after cops allegedly found about 11 grams of marijuana and a loaded 9mm handgun. There was also reportedly lots of cash and a vape pen which they believe contained THC oil.

Boosie apparently was unaware that Georgia is a “hands-free” state and admitted that he was talking while driving on his cell and racked up another charge, a misdemeanor for being on the phone while driving. He also was charged for failure to maintain his lane.

Both were held in the Coweta County Jail.

Allen is in even more hot water.

According to the outlet, he reportedly has felony warrants in South Carolina on firearm and drug charges. He played for the Jets from 2012 until 2015 and Boosie told cops that Allen was now his bodyguard.

Boosie also told the Newnan Times-Herald that charges of “possession of a firearm by a convicted felon” are currently pending for both Allen and Hatch.

(Editor’s note: This story has been modified to clarify that Antonio Allen arrested was not a former NFL player.)