5 times Kodak Black forgot that shutting up is free 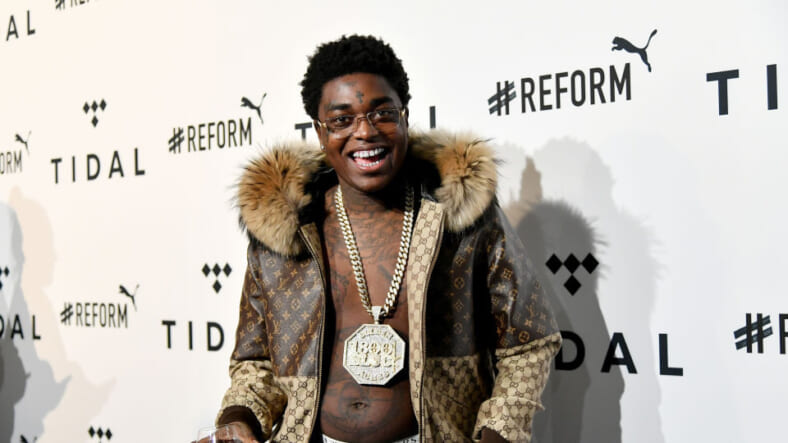 Let’s keep it a buck: Kodak Black is just looking for an ass-whipping under every rock he can find.

The rapper is looking at far worse than a black eye (up to 30 years in prison) if he is found guilty of the rape charge he currently has for allegedly sexually assaulting a high school student in South Carolina back in 2016. But he might not even make it to the court house unscathed if he keeps flapping his gums.

There’s an ever-diminishing line between “keeping it real” by making statements that would rankle certain groups of people and just saying awful shit that pisses everyone off. Kodak, aka Dieuson Octave, aka Bill Kapri (??) crosses that line as a manner of routine. Sure, he’s only 21 and most 21-year-olds have yet to develop anything resembling good sense, but Kodak still speaks like his mom dropped him on that tender part of his skull one too many times when he was a baby.

I don’t advocate for violence, but nothing about Kodak’s actions lead me to believe that anything less than age and maturity, or getting knocked the f— out, will tighten him up. He has a while to be in his 20s, so he might just experience that beat down first. Many of us can’t name one Kodak Black song without using Google (his biggest contribution to music is serving as the inspiration of the title for Cardi B’s “Bodak Yellow”), but we can recall all the stupid shit for which he’s been destroyed on Black Twitter.

Here’s an abridged list of his bejeweled mouth getting the best of him.

Wholesale Shitting on Black Women (and Himself)
Back in 2017, when asked about actress Keke Palmer, Kodak said, “she straight, but I don’t really like Black girls like that.” After social media backlash, a reporter asked him about his controversial statements. He said “I love African American women, but I just don’t like my skin complexion…Light-skinned women, we can break them down more easy.” (Side Note: He was talking to a Black woman journalist.) Considering Kodak resembles a tattooed gremlin, no Black women mourned the “loss” of Kodak Black from their dating pool, but he rightfully got a collective side-eye.

Claiming to Sock Sticky Fingaz
Kodak slithered his rough-looking ass on Instagram Live to talk about how Onyx rapper Sticky Fingaz wound up on his tour bus and he punched him because he didn’t like his “old-head energy.” Apparently, Kodak doesn’t care much for folks old enough to rent a vehicle from Enterprise. Look, I came up on 1990s hip-hop and still own Onyx CDs that are older than Kodak; I’m conditioned to believe that crossing them might get you beat down at the very least. Sticky denied the incident  and responded with a diss track, but I wouldn’t count out Moesha’s boyfriend running up on Kodak with a two-piece at some point.

Being a Disgusting Creep to Young M.A.
Kodak started his creepfest toward rapper Young M.A., an out lesbian, with a comment under a picture of her with Nicki Minaj stating how they can both “get it.” On his single, “Pimpin Ain’t Eazy,” he rapped, “I’m f—-n’ Young M.A, long as she got a coochie, Say she got the strap and the toolie, say she put the crack in her booty.” He doubling down by making all sorts of raggedy comments suggesting Young M.A. just hasn’t had the right penis – his penis – to turn her away from lesbianism. There are many things wrong with Kodak’s persistent lewd statements, but two come to mind above everything else: First, 2019 is not the time to make regressive statements about prominent members of the LGBTQ community. Second, Young M.A. is a beast on the mic and Kodak is a student of the Fisher Price My First Rhyme Book – that smoke from her would suffocate him.

Out of Pocket Lauren London Comments
Kodak drew more ire than he ever did over dissing a lesbian or allegedly assaulting a woman by coming at the woman of a beloved slain rapper (surprise, surprise). As the world just started mourning the fresh murder of Nipsey Hussle, Kodak said on Instagram Live that he’s planning to “wait a whole year” before shooting his shot at Lauren London, Nipsey’s partner and the mother of their son. His comments brought the Black Twitter pitchforks out and got his music banned from some radio stations.

Yuck. Kodak Black is disgusting & makes ignorant comments almost daily. Lauren London is mourning the death of her soulmate & the father of her child less than a week ago & you’re talking about shooting your shot w/ a widow? Like you even stand a chance ? pic.twitter.com/qMzcWqbHBD

…And Then He Doubled Down:
Kodak’s original statements about London provoked comments from a number of old heads, including Big Boi, The Game and T.I., London’s love interest in her breakout film ATL. The backlash provoked Kodak to offer up the mother of non-apologies before then suggesting that T.I. jumped in the fray because he is interested in dating London as well. This isn’t the first time Kodak and Tip have been connected through shit involving a woman. in 2016, Kodak said he would be interested in taking Tip’s stepdaughter Zonnique to prom. When asked if he needed Tip’s approval, Kodak said it wouldn’t be Tip’s business since it’s not his biological daughter.  It might end up that these two throw on some gloves and hash it out in the ring for pay-per-view. Hell, I’d pay to watch that.