Michelle Obama said although America is at a “low” under Trump, we can turn it around

In a book tour stop, the former FLOTUS was encouraging to those who are despairing over tough political times. "We're low, but we've been lower." 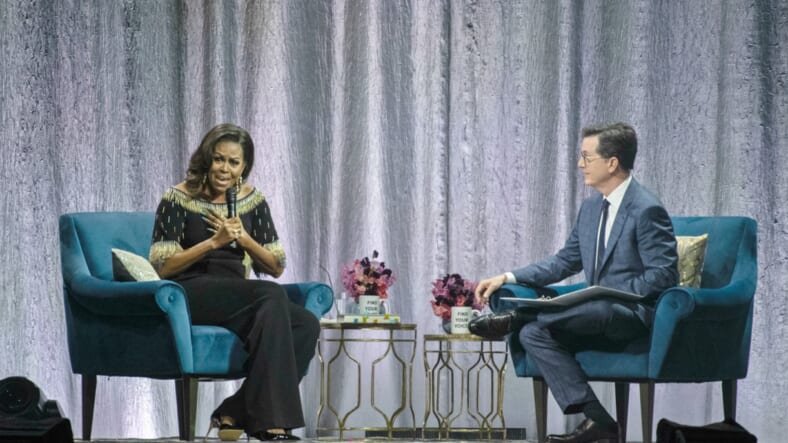 Michelle Obama on stage as part of her ‘Becoming: An Intimate Conversation With Michelle Obama’ tour at The O2 Arena on April 14, 2019 in London, England. (Photo by Chris J Ratcliffe/Getty Images)

Former First Lady Michelle Obama pointed out to ‘CBS Late Show’ host Stephen Colbert that although America is experiencing a “low” point in its history, this is still the same country that elected its first Black president just a short time ago.

“I have to remind people that Barack Obama was elected twice in the United States. That really did happen,” Obama told a crowd of more than 15,000 people at London’s O2 Arena on Sunday during a stop on her book tour, according to The Guardian. The people came out to hear Obama discuss her bestselling memoir, Becoming.

“That wasn’t make-believe,” she said. “The country actually did accomplish it, and half the people who voted in the last election, if they could have, they would have voted for him for a third term.

“We have to remember that what is happening today is true, but what happened before was also true… That should give us some solace at some level,” Obama explained.

Obama told Colbert that just as in a good book, where there are peaks showing triumph and low valleys that people have had to overcome, America is experiencing a low but would soon rise again.

“Yeah, we’re in a low, but we’ve been lower… We’ve had tougher times with more to fear. We’ve lived through slavery and the Holocaust and segregation and we’ve always come out on the other end, better and stronger,” Obama said.

Furthermore, we have the ability to change our circumstances, she said. People who are not happy with Donald Trump should “roll up [their] sleeves” and vote. “We have to pay attention and we have to be engaged and we can’t take our rights and liberties for granted. Because if we don’t vote, somebody will,” Obama said.

The discussion with Colbert marked Obama’s second time appearing in London to promote her book. The first appearance was with writer and activist Chimamanda Ngozi Adichie before a sold-out crowd at the city’s Southbank Center.