With a crowded and possibly growing field among Democrats, the one-time Libertarian vice presidential candidate is the sole Republican so far who wants to unseat the president 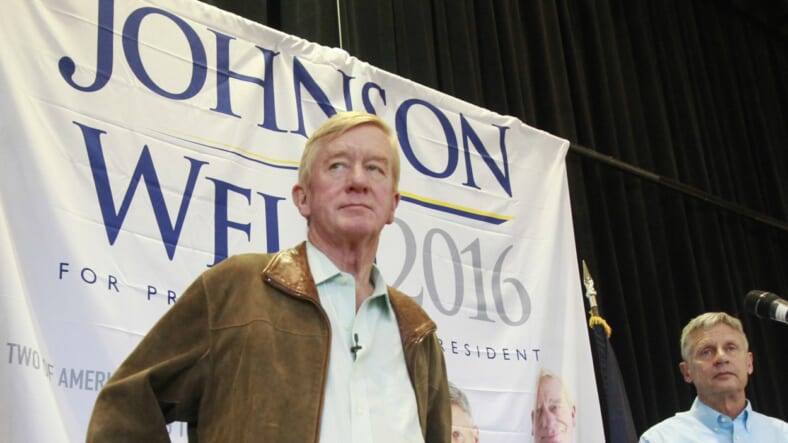 Bill Weld (L), campaigning as the running mate of Libertarian presidential candidate Gary Johnson in 2015. In the 2020 race, he is running for president as a Republican. (Photo by George Frey/Getty Images)

Former Massachusetts governor Bill Weld has announced he’s entering the White House race, making him the first Republican to go up against President Trump in the 2020 contest.

While Trump wants to “Make America Great Again,” according to the campaign slogan that has come to be associated with the far right, Weld says “America deserves better” in a three-minute campaign announcement video. The film includes clips of Trump mocking the late Sen. John McCain, R-Ariz., making fun of a disabled journalist and making disparaging comments about women in the infamous “Access Hollywood” recording, NBC News reports.

While the Democrats have no fewer than 15 candidates who want to take the White House back, Weld is the only Republican so far who has made the announcement to challenge Trump.

In a statement published by NBC News, Weld said, “It’s time for patriotic men and women across our great nation to stand and plant a flag. It is time to return to the principles of Lincoln — equality, dignity, and opportunity for all. There is no greater cause on earth than to preserve what truly makes America great. I am ready to lead that fight.”

Weld added that “he believes that we must preserve the democratic institutions of our Republic: the rule of law, a free and open press, and America’s global leadership in maintaining a freer, safer world.”

Weld supports abortion and same-sex marriage and is on the board of a cannabis company that seeks to ease regulations, Axios reports. In 2008, he endorsed Obama over McCain for president. In the 2012 race, he supported former Massachusetts governor Mitt Romney over Obama for president.

When it comes to the economy, however, Weld runs conservative and cutting spending is a priority for him, Axios reported.