‘Homecoming: A Film By Beyoncé’ brings Bey’s brilliance and Blackness to Netflix 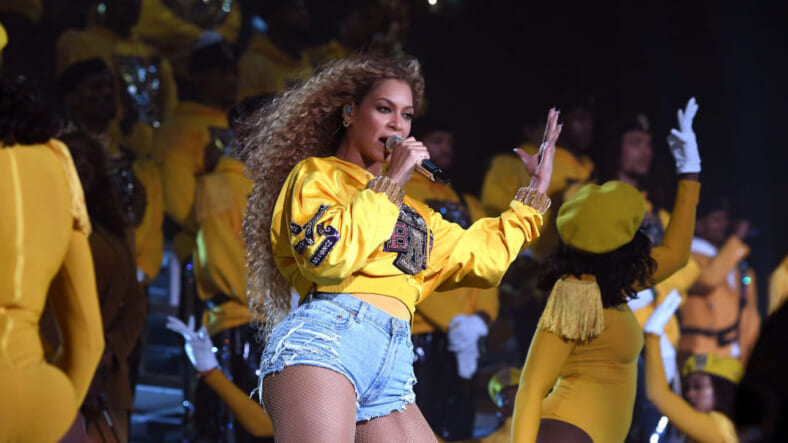 Beyonce is no stranger to setting the bar, and she raised it higher than ever when she headlined Coachella in 2018. In her new Netflix film Homecoming, the superstar invites viewers on the 8-month journey to the historic performance that put #BlackExcellence on full display.

In the just over two-hour documentary that Beyonce Knowles-Carter executive produced, directed, and starred in, fans get an intimate look at what went in to creating one of the most spectacular shows ever. While Queen Bey is known for her incredible stage presence, nothing she has ever done compares to the meticulously curated set she served up at what will forever be known as #Beychella.

Bey didn’t take the honor of being the first Black woman to headline the annual music festival lightly. She took that ball and ran her ass off. From her elaborate costumes, to the hand-picked orchestra, dancers, drumline, and majorettes; every aspect of the show was meant to highlight the importance and impact of the HBCU experience. Hearing Beyonce describe her intention and watching her pull it off will likely leave even her harshest critics in awe of her talent and her vision.

The documentary illuminates many truths about Beyonce and highlights several of her strengths including her relentless drive, her unyielding desire to deliver powerful messages, and her unique ability to educate and empower as she entertains like no other.

For those who missed both of her Coachella performances last year, Homecoming gives up the goods by revealing what happened on the stage and more importantly, why it happened. Every aspect of the show had a purpose and music fans will be fascinated by the way Beyonce considered every detail. Her inclusion of everything from the Black National Anthem (“Lift Ev’ry Voice and Sing”) to the spot-on stepping segments; Beyonce put the whole world up on game they never knew existed while paying homage to her people in the most loving (and lit) way possible.

“So many people who are culturally aware and intellectually sound are graduates from historically black colleges and universities, including my father,” she says. “There is something incredibly important about the HBCU experience that must be celebrated and protected.”

Fans will get to see a much more vulnerable version of the icon than they’re used to. In rare form, we watch a woman who embodies the meaning of confidence battle the same demons many of us confront on a daily basis. Less than a year after giving birth to twins, Rumi and Sir, Beyonce grapples with the same self-doubt so many women and mothers will relate to. Can her body bounce back? Can it do what it used to? Can she dedicate the time and energy her work requires while managing to be an attentive mother?

Seeing Beyonce fight for the performance of her lifetime is as inspiring as the main event and reminds us all that she struggles like the rest of us mere mortals. In one particularly candid scene, she admits she was 218 pounds when she gave birth to her twins and reveals that in order to meet her goal, she gave up pretty much everything from dairy to carbs to alcohol. Unlike so many other A-listers, she doesn’t drop this knowledge like it’s nothing, but instead admits “I’m hungry.”  She celebrates the moment she fits into an old costume like someone who has really been suffering through the grueling work for it. THANK YOU.

Homecoming has even more to offer die-hard fans who have been clamoring to see the twins she shares with her husband, JAY-Z. The toddlers are rarely photographed, but Bey must have been feeling generous when she decided to include tons of precious moments with her family in the documentary. The tiny tots are just as adorable as we imagined and watching her interact with them and her 6-year-old daughter, Blue Ivy, shows that motherhood suits her very well indeed. If you were wondering if Blue Ivy has picked up any tricks and tips from her famous parents, the answer is clear when we see her mastering the choreography and calling some shots during rehearsals.

The Carters have made it clear that their success is a family affair and that doesn’t just include their nuclear brood. Beychella was created for the people, for our people, and it’s one of the most comprehensive and cohesive demonstrations of the beauty of Blackness we have ever seen on stage and now, onscreen.

‘Homecoming: A Film By Beyoncé’ is available on Netflix now.