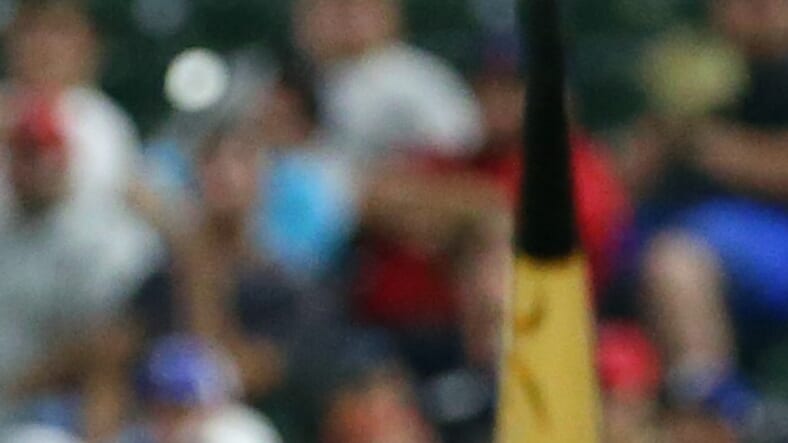 Image of baseball bat of Kole Calhoun after he tossed his bat. (Photo by Richard Rodriguez/Getty Images)

For 65-year-old Florida resident Clarese Gainey, all she needed to stop an attacker was her baseball bat and softball experience she had in high school.

This past Sunday Gainey heard someone outside her apartment, looked outside and saw a man in his boxers attempting to break into her car. Gainey would then grab her baseball bat and attempt to stop the theft.

“I grab my bat, I brace myself, and I ease the door open,” Gainey said.

According to WJLA, that’s when Antonio Mosley, a 5’6″, 300-pound man, would charge at her. Mosley would then catch a home run swing from Gainey resulting in him screaming and running away into a mobile home park that was not far away.

After Mosely fled, Gainey noticed he left behind pants, shirt, and a sock. She called the police who dispatched a K-9 unit that found Mosely in a mobile home in the park in a new pair of pants.

Unfortunately for Mosely, not only would he be arrested for two counts of burglary but would also be booked for drug possession after cocaine was found in the pocket of the new pair of pants he put on.

Officers made sure to bring Mosely back to Gainey’s residence for identification, which she had no problem confirming he was the man she had the encounter with.

“He better be glad I didn’t have a gun,” Gainey said. “Because I would have shot him. But this is my gun right here [baseball bat].”

Mosely is currently being held at the Alachua County Jail in Florida. As for Gainey, she reveals that her signature “pi-yah!” is more than enough to protect her property, even when she is outsized by her attacker.