Police are searching for a gunman who opened fire at two Baltimore cookouts, killing 1 person and injuring 7

Baltimore police are searching for an individual they believe fired into a crowd of people celebrating a neighborhood barbecue. So far they have no motive 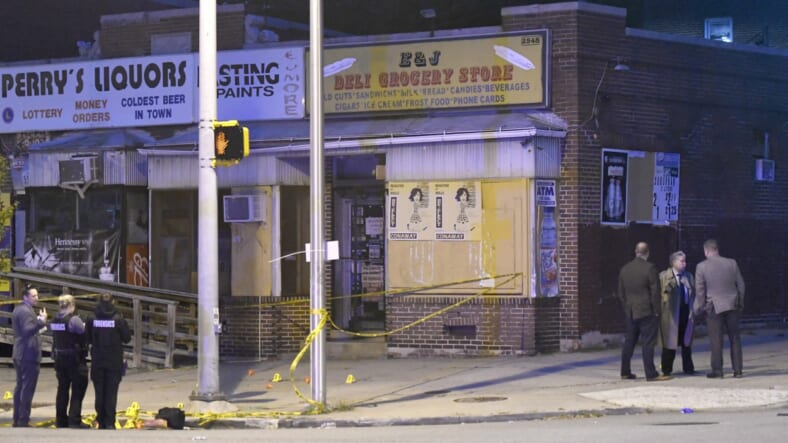 Police work near the scene of a shooting in Baltimore on Sunday, April 28, 2019. A gunman fired indiscriminately into a crowd that had gathered for Sunday cookouts on a Baltimore street, wounding several people including at least one of them fatally, the city’s police commissioner said. (AP Photo/Steve Ruark)

Police say eight people were shot during a cookout in West Baltimore on Sunday, and one victim has died from the attack.

READ MORE: Best friend of Freddie Gray; leader of protests after his death, killed in Baltimore

The other seven victims received medical attention for non-life threatening injuries at local area hospitals. The motive for the shooting remained unclear, however Harrison said some evidence seems to confirm someone at the cookout shot back at the gunman, according to The Sun.

Police discovered numerous bullet casings at the crime scene. The casings were on the ground nearby grills that appeared to be set up for the cookout.

“At this time suspect information and motive is unknown to investigators,” police said in a release Sunday night.

Although rumors quickly spread across social media that the shooter was a white man in a white t-shirt and blue jeans, police identified the shooter as a Black man and offered no other description.

Acting Mayor Bernard C. “Jack” Young is asking the public’s help in helping police determine a motive for the shooting and to help bring the suspect to justice.

“People know who’s doing these shootings and who is targeting these people,” Young told The Sun.

Harrison added that the shooting was “very cowardly” and appeared to be “extremely targeted.”

He said there were many people outside at the time of the shooting so his department would continue to look for witnesses.

The shooting comes roughly six weeks after Harrison’s swearing-in last month as Baltimore police commissioner, when he promised to make the city safer and lead the department through sweeping reforms required by a federal consent decree. It’s a daunting task in one of the country’s poorest major cities where there were more than 300 homicides in each of the past two years. Harrison is the city’s 14th police leader since the mid-1990s.