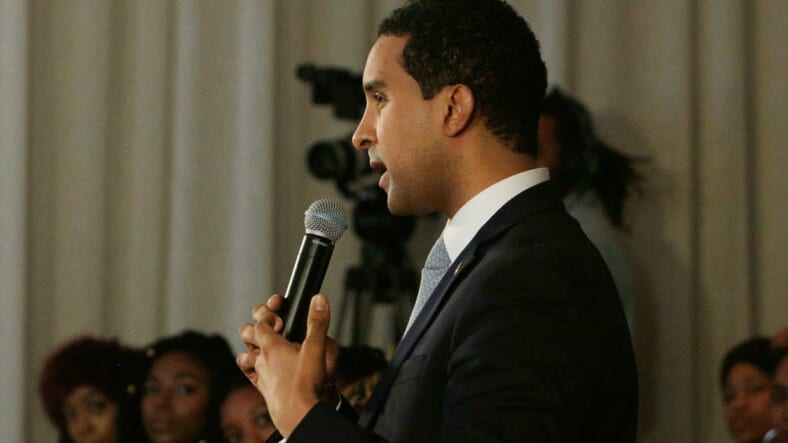 Mayor of Mount Vernon, NY Richard Thomas addresses the panel during the BET Music Presents: Us Or Else panel discussion at the Viacom White Box Hall on April 6, 2017 in New York City. (Photo by Lars Niki/Getty Images for BET)

A Black mayor in suburban New York alleges he was the target of racial profiling, after bank employees called police on him while he attempted to deposit a city check.

According to the Mount Pleasant Daily Voice, Mount Vernon, N.Y., mayor Richard Thomas said that a JPMorgan Chase employee called authorities on him last week after he attempted to deposit a six-figure check. The incident took place even though Thomas’ chief of staff and a Mount Vernon police detective who was working a security detail were both present.

“As a mayor and as a young, well-educated Black man living during this turbulent time in society where police are being called on Black people for going about everyday life, this is unacceptable,” Thomas said in a letter to Chase CEO Jamie Dimon. “We’ve seen this happen to two Black men at a Starbucks in Philadelphia. We’ve also seen this happen to Oregon Rep. Janelle Bynum while she was campaigning. Now it happened to me.”

Thomas and city Comptroller Deborah Reynolds are currently involved in a heated dispute over the city’s finances reports Lohud.com. As a result of a recent court order they are both required co-sign city checks, and Reynolds has been ordered to give the mayor access to the city’s bank records.

On the day in question, he was made to wait 90 minutes in a conference room before he was allowed to see a senior vice president at the bank. During his long wait he ordered food and asked the plain clothes detective working his security detail to go pick up the delivery on his behalf.

However, when the detective went down to meet the delivery, bank officials noticed detective’s service weapon and called police.

“Our staff acted appropriately,” said bank spokesman Joseph Evangelisti, who concedes that responding officers left after recognizing the detective as one of their own.

“No one should go to the bank and be told the cops are coming because you are here,” said Thomas who maintains that race played a factor in how he was treated.

Thomas says he plans to file a formal complaint against Chase for the incident, according to the Daily Voice.